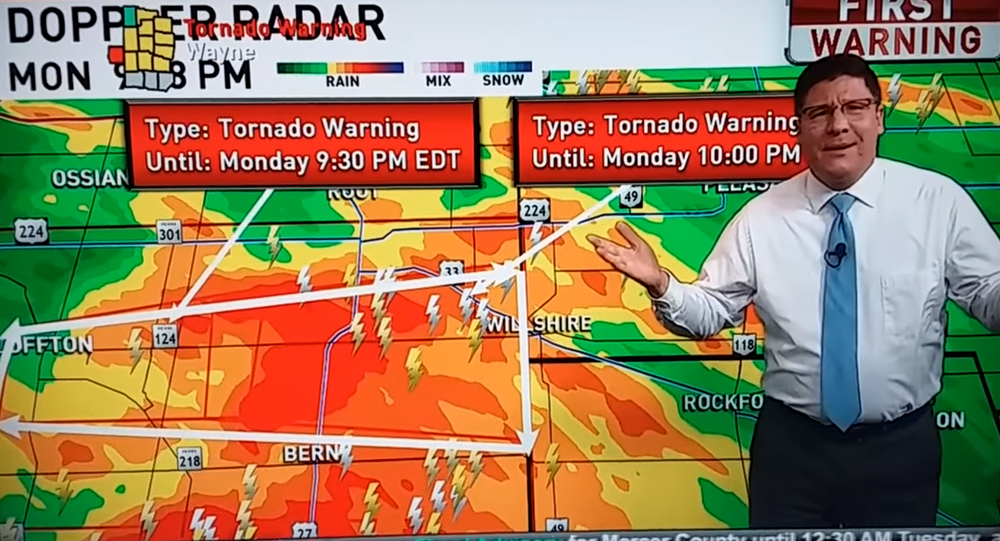 An Ohio weatherman providing breaking tornado coverage minced no words in responding local viewers who openly expressed outrage that their reality TV show was interrupted for his update.

Viewer's of ABC's reality dating show "The Bachelorette" in the Dayton, Ohio, area had their regularly scheduled program interrupted Monday for tornado and other severe storm warnings.

Dangerous storm systems have been causing death and damage across the US for almost two weeks, but even in these times of crisis, some viewers cared less about leaving home and more about seeing who would be the 15th contestant sent home.

Catching wind of the angered ABC viewers' comments on social media, chief meteorologist Jamie Simpson upped the drama in his own broadcast in an attempt to give the reality TV lovers a reality check.

"Some of you complain this is all about my ego. Stop, it's not. I'm done with you people, I really am. It's pathetic," Simpson is heard saying in response the angered viewers.

The vocally flustered weatherman immediately apologized for his aside before getting back to the actual coverage, but also highlighted how a number of social media users "don't care about other people's safety" in the area.

The day following his on-air outburst, Simpson, much to thousands of Twitter users' delight, took to the social media site to send a sassy but stern message to mainstream outlets attempting to get quotes from him unrelated to the ongoing storm systems.

To all the National media outlets wanting to talk to me:
We had an EF-3/4 tornado last night, more severe possibly the next three days… let me do my job please.

Between Monday and Tuesday, a number of tornadoes with winds up 140 mph touched down in the Dayton area, according to Accuweather.

Jeffrey Hazel, mayor of the neighboring city of Celina, confirmed Tuesday during a press conference that at least one man, aged 81, died after winds catapulted a vehicle into his home. At least 12 others in the surrounding Dayton community sustained injuries, said Mercer County Emergency Management Director Mike Robbins on Tuesday.

Simpson's bluntness and dedication to others' safety did not go unnoticed across Twitter, as countless users, even Bachelorette Hannah Brown, praised the meteorologist.

Lolz too funny, thanks Dayton, Ohio for the love, but be safe. naders are no joke. https://t.co/RdxYOUpx4w

My hometown weatherman SNAPPED last night during the tornadoes in Dayton. I’m dying. What a hero. 😂 pic.twitter.com/Yq5jUWoojR

I felt that on a personal level.

Agree, you saved lives last night. Thank you for doing your job really well. I couldn't believe people were calling because they wanted to watch their programs, glad you stayed on over 16 hours. It's obvious you care. 🙏😉

It needed to be said. Last night was terrifying.

Wish we had you here in Florida for hurricanes!

Someone with concern for life, intelligence and tge balls to tell those who dont care where to go!!!

This dude gets my respect.

You did nothing wrong sir. Your coverage and that of the other networks in our area is probably why why had the low injury and death toll from such terrible storms. Thank you for all you do to help the community.