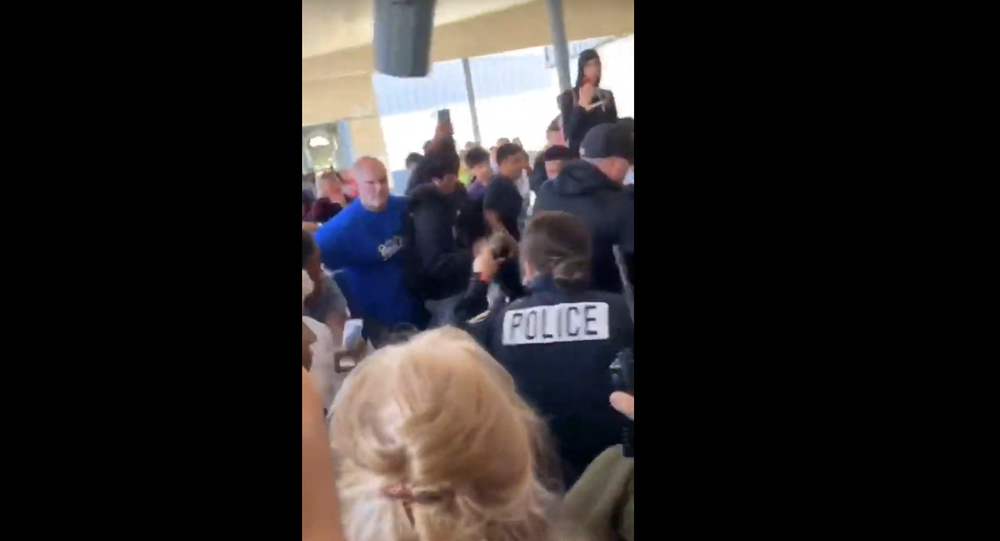 WATCH: Trash Can Flung at US Police During Rowdy 80-Student High School Struggle

California police officers responding to a report of a single unruly high school student last week found themselves phoning for backup after a struggle between the teen and cops spilled over into an incident attracting around 80 adolescents.

Officers received reports at 10:46 a.m. local time Friday morning detailing a physical altercation in which a single student had begun lashing out at staff and a school resource officer. Authorities say that when they arrived, the student did not comply and began resisting when officers attempted to detain him.

It's then that the situation escalated. Around 80 students swarmed to the immediate area, and while most can be seen on video recording the spectacle, several of them got physical with authorities and threw miscellaneous objects in an effort to prevent their classmate from being detained.

In one student's footage from the scene, a commercial-size trash can is seen soaring through the air in an upright position (at 0:33) as another teen is heard screaming.

"Everyone was outside. Teachers were worried, keeping them in class," Bear Creek senior Kayla Loggins told CBS Sacramento.

Additional video captured by a spectating teen shows students and officers alike attempting to grab hold of a student presumed to be the subject of the initial call.

The cops eventually regained control of the situation and elected to detain the student off-grounds in order to prevent another fracas.

Wikimedia Commons / Gage Skidmore
‘You Did Not Silence Us’: US School Apologizes After Censoring Teens’ MAGA Hats (PHOTO)

In a turn of events, Stockton police are now using footage recorded by students to identify teens who took part in the brawl — if the department decides to level charges against those who interfered.

As of Tuesday, authorities have still only cited the original unruly student with resisting arrest, but the school district says it will remain cooperative with ongoing investigations.

Despite the struggle, no students, officers or school staff members were harmed.