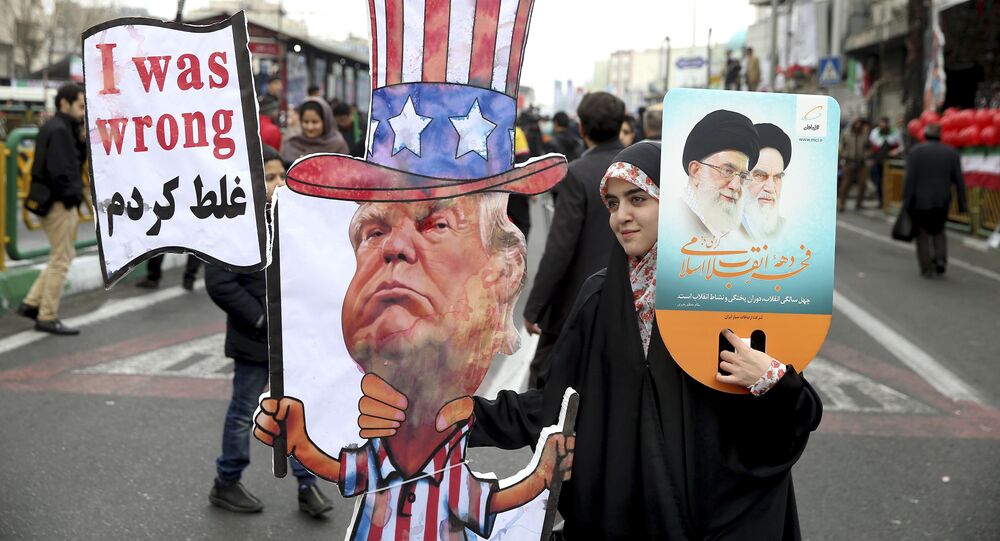 Trump on Iran: 'Nobody Wants to See Terrible Things Happen'

Earlier, the US announced the deployment of 1,500 additional troops to the Middle East to counter “credible threats” from Iran in a move denounced by Tehran on Saturday as “a threat to international peace”.

Speaking during the course of an official visit to Japan, US President Donald Trump on Monday did not exclude the possibility of negotiations with Iran, The Times of Israel reported.

“We’ll see what happens, but I know for a fact that the Prime Minister [Abe] is very close with the leadership of Iran… nobody wants to see terrible things happen, especially me.”

The US president made the statement while meeting with Japanese Prime Minister Shinzo Abe, who is reportedly considering visiting Tehran.

© AFP 2021 / FABRICE COFFRINI
‘No Talks With US’: Iran Ready to Negotiate With All Gulf States – Deputy FM
A report by Yomiuri Shimbun newspaper, citing government sources, said the US president supported Abe’s idea and suggested the visit happen soon.

Responding to the latest US moves to build up forces in the region, Iran's foreign minister Mohammad Javad Zarif said on Sunday that the country will defend itself against any “war efforts”.

“We will defend against any war efforts against Iran, whether it be an economic war or a military one, and we will face these efforts with strength,” Zarif said during a joint conference with Iraqi counterpart Mohammed al-Hakim.

Earlier this week, the United States said it was deploying 1,500 additional troops to the Middle East to counter “credible threats” from Iran, with Tehran denouncing the move as “a threat to international peace.”

The new deployment will include reconnaissance aircraft, fighter jets and engineers, with six hundred personnel belonging to a Patriot missile defence battalion in the region that has had its stay extended.

The Pentagon has justified the beefed up force as a response to "threatening activity" and a number of minor attacks in May allegedly by Iranian forces, the Iranian Revolutionary Guard Corps, and “proxy” forces.

The incidents referred to include a rocket launch targeting Baghdad’s Green Zone, four tankers damaged by explosive devices in Fujairah near the entrance to the Gulf, and a Saudi oil installation hit by a Houthi drone.

Tehran has denied any involvement in the attacks.

READ MORE: Iraqi President Receives Invitation to Visit Iran Amid Tensions With US

Pentagon officials have repeatedly stressed that the US does not seek war with Iran.

“We do not see these additional capabilities as encouraging hostilities. We see them as defensive in nature,” said acting Assistant Secretary of Defence Katie Wheelbarger.

“Our policy remains an economic and diplomatic effort to bring Iran back to the negotiating table to encourage a comprehensive deal that addresses the range of their destabilising behaviour in the region,” Wheelbarger added.

The escalation of the US military presence in the region comes in the wake of a decision in early May to dispatch an aircraft carrier strike force and B-52 bombers as a preemptive  show of force against an allegedly imminent Iranian plan to attack US assets.

Last year Donald Trump pulled the US out of the Obama-era Iran nuclear deal and subsequently reimposed sanctions on the country.

US Withdraws From Iran Nuclear Deal