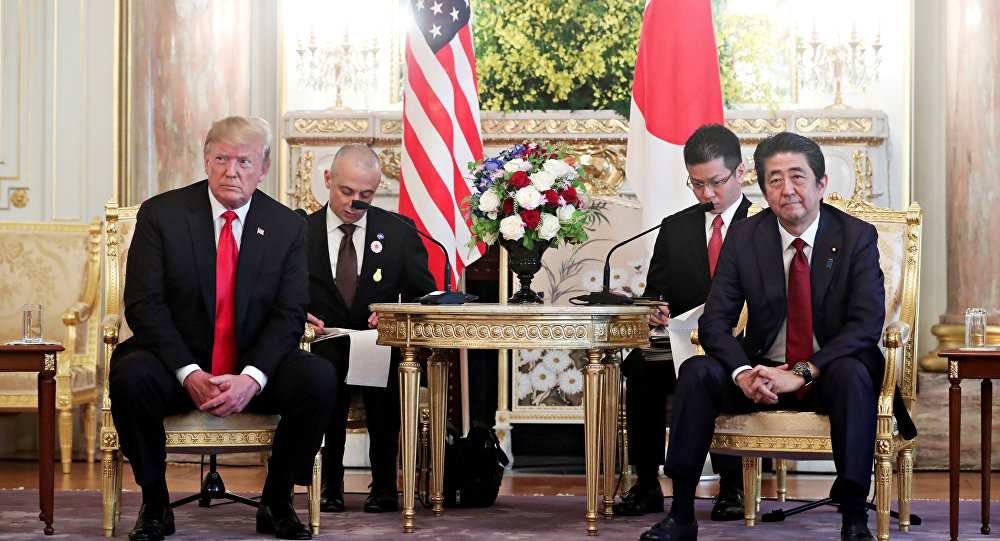 Trump Says There is 'Great Respect' Between US and DPRK

The statement came during US president Donald Trump's official visit to Japan, prior to bilateral talks between him and Japan's prime minister Shinzo Abe. Earlier in the day, Trump met with the new Japanese Emperor Naruhito.

US president Donald Trump has reportedly said that there is "great respect" in relations between the US and North Korea, according to AFP.

Donald Trump noted that he expected "lots of good things" despite recent missile launches by Pyongyang.

"I personally think that lots of good things will come with North Korea, I feel that. I may be right, I may be wrong, but I feel that," Trump said as cited by AFP.

The statement came prior to the start of bilateral talks with Japan's Prime Minister Shinzo Abe.

The US president highlighted that there was "tremendous" imbalance in trade with Japan but said that it could be "worked out" as the pair negotiate a deal, according to AFP.

© REUTERS / Jonathan Ernst
Trump Becomes First Foreign Leader to Meet Japan's New Emperor
Trump also commented on the situation in relations between the US and the Islamic Republic of Iran.

"I do believe that Iran would like to talk, and if they'd like to talk, we'd like to talk also," Trump said as cited by AFP. "We'll see what happens, but I know for a fact that the prime minister (Abe) is very close with the leadership of Iran… nobody wants to see terrible things happen, especially me."

Earlier Donald Trump met with the new Japanese Emperor Naruhito, becoming the first foreign leader to do so.

The bilateral talks between Trump and Abe were earlier promised to lead to "interesting announcements."

"The President and Prime Minister Abe will likely hold a joint press conference where they'll have some very interesting announcements covering, really, the range of the relationship", a senior US administrative official told reporters earlier.