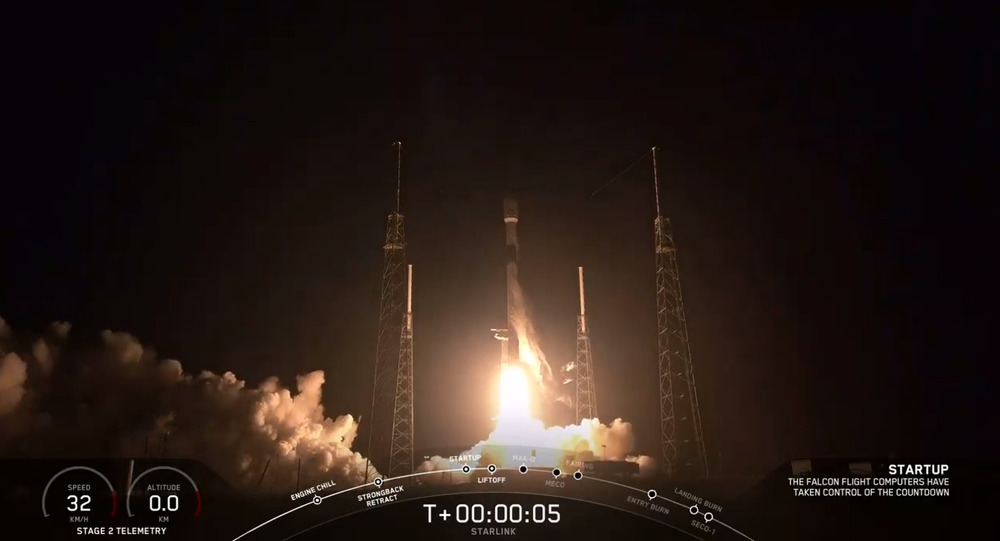 It was the third attempt by SpaceX to launch the Falcon 9 rocket carrying its first 60 Starlink satellites. On 16 May SpaceX delayed the launch due to excess upper-level winds.

The rocket blasted off from Cape Canaveral Air Force Station at about 10:30 p.m. local time. Approximately one hour and two minutes after liftoff, the Starlink satellites will begin deployment at an altitude of 440km. They will then use onboard propulsion to reach an operational altitude of 550km, SpaceX says.

According to SpaceX, the first stage entry burn was completed, while the second stage was continuing nominally to low Earth orbit.

After the second stage engine cutoff was confirmed SpaceX announced that its webcast will return in about 35 minutes.

According to SpaceX, "Starlink is a next-generation satellite network capable of connecting the globe, especially reaching those who are not yet connected, with reliable and affordable broadband internet services."

According to SpaceX CEO Elon Musk, the Starlink mission is SpaceX's heaviest load.

"Starlink mission will be heaviest @SpaceX payload ever at 18.5 tons. If all goes well, each launch of 60 satellites will generate more power than Space Station & deliver 1 terabit of bandwidth to Earth", Musk wrote on Twitter. ​

Starlink was launched in 2015, and envisages the development of global low-cost and high-performance internet. The company has reportedly raised over $500 million to launch as many as 12,000 satellites. The network is expected to become operational after at least 800 of them are deployed into Earth's orbit.