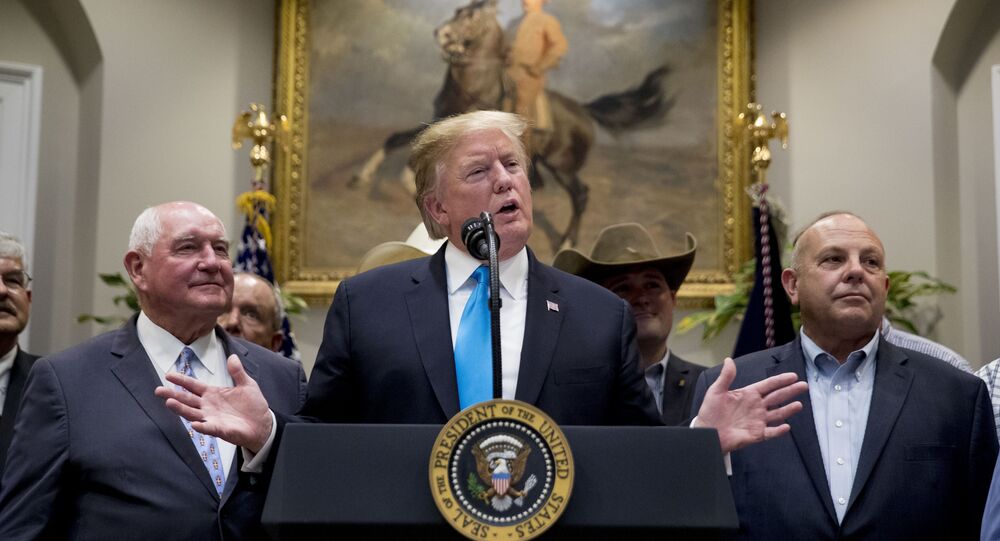 On Thursday, US president Donald Trump delivered a speech in support of America's farmers, hit by the trade war with China. Besides the primary topic, Trump touched on a variety of questions, among which were the prospects for a US-China trade deal and inclusion of Huawei in the latter, and the possible deployment of US troops to the Middle East.

US president Donald Trump, speaking at the White House on Thursday, praised a plan suggested by his administration to provide the country's farmers with an aid package intended to combat the effects of a trade war with China, Reuters reported.

"The $16 billion in funds will help keep our cherished farms thriving and make clear that no country has a veto on America's economic and national security," Trump said.

The US president clained that there is going to be  a swift end to the ongoing trade war with China, although no high-level talks have been scheduled between the two countries since the last round of negotiations ended in Washington two weeks ago, according to Reuters.

"It's happening, it's happening fast and I think things probably are going to happen with China fast because I cannot imagine that they can be thrilled with thousands of companies leaving their shores for other places," Trump said as cited by Reuters.

He noted that he remains hopeful that  "at some point" the US would get together with China, adding that he looks forward to seeing Chinese leader Xi Jinping at the upcoming G20 meeting in Japan.

The president argued that it would be fine if a deal between the US and China didn't happen, but noted that, if it did — that would be great, according to Reuters.

The US president also commented on the situation around Chinese tech giant Huawei, calling the latter "dangerous."

"You look at what they've done from a security standpoint, from a military standpoint, it's very dangerous," Trump said as cited by Reuters.

He also noted that Huawei's dispute with the United States could be resolved in a trade deal with China.

"If we made a deal I could imagine Huawei being possibly included in some form of or some part of a trade deal… I think probably a good possibility," Trump said on Thursday when asked if there is still a possibility of a trade deal with China despite tensions over Huawei.

Trump, however, also said he was concerned about Huawei from a national security standpoint.

© REUTERS / Toby Melville
Pompeo Accuses Huawei of 'Lies' Over Gov't Ties, Thinks More Firms Will Ditch Tech Giant
On 16 May, Trump issued an executive order adding Huawei and its 70 affiliates to a trade blacklist, thereby restricting its activity in the country. US companies are required to receive permission for trading with the telecom company.

As a result, Google had to suspend business operations with Huawei, including the transfer of hardware, software and technical services, except those publicly available via open source licensing

Deployment of US troops to the Middle East

Donald Trump noted that he doesn't think that the US is going to need additional troops in the Middle East to counter Iran, Reuters reported.

"I don't think we're going to need them. I really don't,"  Trump told reporters at the White House. "I would certainly send troops if we need them." If needed, "we'll be there in whatever number we need," he added.

He said that he prepared to meet Pentagon officials to discuss it later in the day.

Earlier in the day, Acting Defence Secretary Patrick Shanahan affirmed that the Pentagon was considering dispatching more US troops to the Middle East to strengthen protection for American forces there amid tensions with Iran. His statement came following reports that the US was considering sending  5,000 to 10,000 additional troops to the Middle East, that, according to Shanahan, appeared to be inaccurate.

He continued his speech by attacking the Speaker of the House, Nancy Pelosi, she was critical of the collapsed infrastructure talks between Trump and Democratic lawmakers, which Trump walked out of a day before, in response to sprawling congressional probes into his administration and businesses, according to a Reuters report.

Trump highlighted that House Speaker Nancy Pelosi does not understand the US-Mexico-Canada trade deal and had told US Trade Representative Robert Lighthizer she wanted two weeks to familiarize herself with the agreement.

Pelosi, responding to Trump's remarks, tweeted: "When the 'extremely stable genius' starts acting more presidential, I'll be happy to work with him on infrastructure, trade and other issues."

Trump also touched on the release of US citizen John Walker Lindh, who served 17 years of a 20-year sentence for pleading guilty to providing support to Taliban fighters in Afghanistan.

He said that the United States would be closely watching John Walker Lindh after his release from prison, according to Reuters.

Trump told reporters at the White House that he had asked government lawyers whether the release could be stopped, noting that Lindh had not given up on his views, but said there was nothing that could be done to prevent his release, Reuters report says.

"What bothers me more than anything else is that here's a man who has not given up his proclamation of terror, and we have to let him out. Am I happy about it? Not even a little bit," Trump said.

Earlier in the day, US Secretary of State Mike Pompeo said that John Walker Lindh, the first US-born detainee in the War on Terror, is still a threat to the United States, and is "still committed to the very jihad that he engaged in that killed a great American and a great CIA officer".