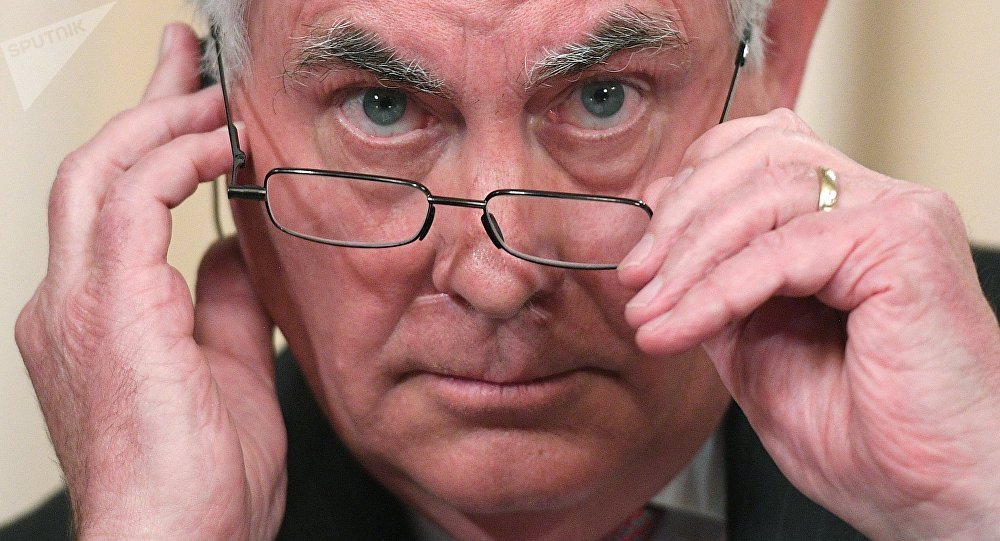 This is not the first time that Trump attacks the former secretary of state and questions his "mental capacity". This time, the rant was provoked by purported statements that Tillerson made in secret talks with House lawmakers.

US President Donald Trump lashed out at former State Secretary Rex Tillerson on Twitter, calling him "dumb as a rock" for his alleged criticism of POTUS' lack of preparedness for the meeting with his Russian counterpart in in Hamburg. He further argued that Tillerson was "ill prepared and equipped" to work in such a high position.

Rex Tillerson, a man who is “dumb as a rock” and totally ill prepared and ill equipped to be Secretary of State, made up a story (he got fired) that I was out-prepared by Vladimir Putin at a meeting in Hamburg, Germany. I don’t think Putin would agree. Look how the U.S. is doing!

Earlier reports suggested that Tillerson had secretly met with congressional lawmakers on the Foreign Affairs Committee last week to discuss his activities as US secretary of state. According to the sources, cited by media outlets, Tillerson insisted that Russian President Vladimir Putin had "out-prepared" Trump during their 2017 meeting in Hamburg, Germany.

Trump's Twitter rant amused most netizens, who wondered why the US president would hire such a "dumb" person to be the frontman of American diplomacy.

Yeah, who hired that guy anyway?

Why did TRUMP hire Rex Tillerson who Trump says is dumb as a Rock.......

Some satirically "agreed" with the president's verdict regarding Tillerson's mental abilities, saying that otherwise, he wouldn’t have signed up for Trump’s team.

The very best evidence that Tillerson is dumb is that he agreed to work for Donald Trump.

One netizen noted that it’s unlikely that Tillerson would lie to Congress under oath - although it's unclear if he actually gave one, just to mess with Trump.

So you are saying the former CEO of Exxon and Sec. of State of the US lied to Congress under oath, and will face 5 years in prison now for doing so because he doesn't like you?

Others simply reminded Trump of his earlier Twitter-praises of the then newly appointed secretary of state.

The tweets he leaves behind are a part of history! They will be in history books! Another #trumptantrum 🤣 pic.twitter.com/Jg26SByxX0

Several Twitterians disagreed with the US president’s evaluation of Tillerson's capabilities, highlighting how much he has achieved during his lifetime.

Rex Tillerson is a civil engineer who rose to Chairman/CEO of ExxonMobil in 2010 held the top job until he retired 2017. ExxonMobil is one of the top 10 largest companies in the world.

Trump has in the past slammed Tillerson as "dumb as a rock", insisting that he "didn’t have the mental capacity needed" for the job as a secretary of state. He also claimed that Tillerson was "lazy as hell" and complained that he couldn't get rid of him "fast enough".