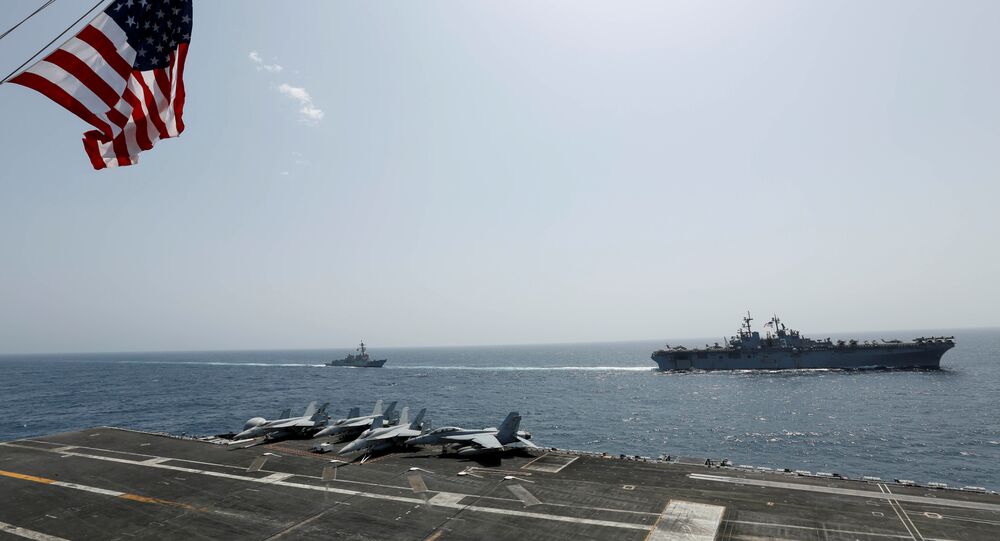 The US recently increased its military presence in the Middle East, sending an aircraft carrier strike group to the Persian Gulf and reportedly deploying a regiment of B-52 bombers to the region amid growing tensions between Washington and Tehran.

Acting US Defence Secretary Patrick Shanahan told journalists on 21 May that Washington's actions towards Iran have had an effect and that although the "threats" from Tehran persist, they have been put "on hold", without elaborating further.

"That doesn't mean that the threats that we've previously identified have gone away. Our prudent response, I think, has given the Iranians time to recalculate", Shanahan said.

The acting defence secretary expressed hope that "Iran is listening" and understands the motive behind the recent American actions, going on to explain that the US is not going to war with Tehran, but that its moves have been aimed at addressing regional issues. He went on to say that previously, the US had focused its efforts on making sure that there were "no miscalculations by the Iranians".

Shanahan's statements come amid heated verbal exchanges between US President Donald Trump and Iranian officials. Trump recently called Iran "hostile" and repeatedly has warned it against attacking the US or its interests in the Middle East, threatening that it would be "the official end of Iran", as Washington would respond to aggressive moves with "great force".

His statements were preceded by the deployment of an American aircraft carrier strike group in the Persian Gulf region, which was reportedly joined by a regiment of B-52 bombers and Patriot missile defence systems in the Middle East amid intensifying tensions between the two states.

Tehran slammed the US military deployments, calling Trump's tirade "genocidal taunts". At the same time, Supreme Leader Ali Khamenei insisted that his country doesn't seek war with the US, but will resist it vehemently until Washington is "forced into a retreat".

The two states' bilateral relations have been worsening since the US withdrew from the Iran nuclear deal on 8 May 2018, which was signed in 2015 by a group of states to ensure the peaceful character of the Iranian nuclear programme in exchange for sanctions being lifted. Washington unilaterally re-imposed the sanctions in November 2018, threatening the existence of the deal.

On 8 May 2019, Tehran announced that it would withdraw from some of its "voluntary" commitments under the nuclear deal, citing the failure of other parties to the accord to cope with US pressure. Tehran has repeatedly slammed the EU's efforts at establishing a mechanism to bypass the American sanctions, called INSTAX. The signatories to the Iran nuclear deal expressed regret at Tehran's decision, with Russia and China blaming the US policy for the country's move.