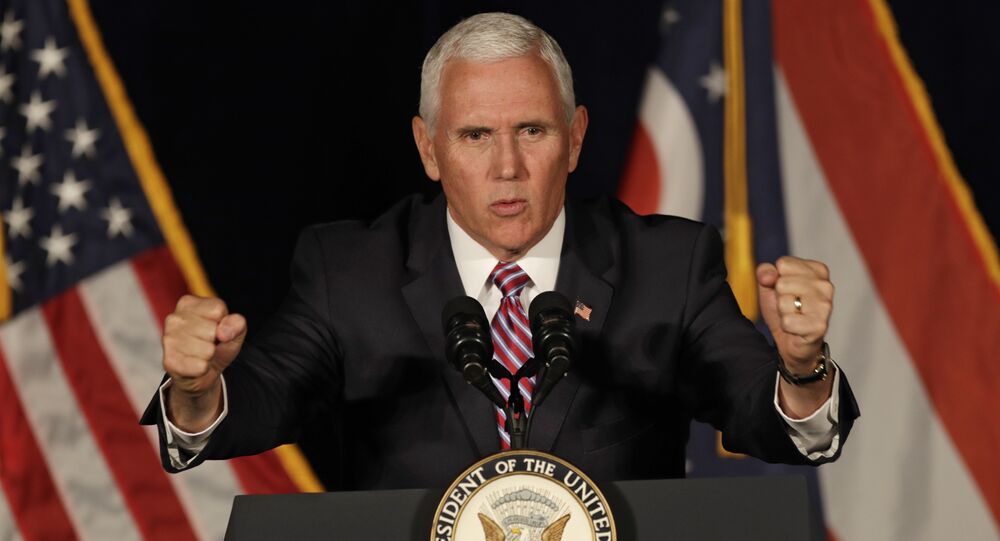 US Vice President Mike Pence provided no details on a US plan to handle the political crisis in Venezuela during a recent press conference, as, according to observers, it becomes increasingly apparent that Washington’s strategy to oust legitimate President Nicolas Maduro has stalled.

"The US will not stand idly by watching the Venezuela situation unfold," said Pence on Monday.

Speaking at a press conference at the Shultz Center in Jacksonville, California, Pence called the situation in Venezuela a "tragedy," but declared out that it is due to Maduro's "drive by the dictatorship and socialism".

According to Pence, Maduro has "no legitimate claim to power" and "must go."

Exactly one year ago, on 20 May 2018, Maduro was elected the President of Venezuela. The opposition refused to accept the outcome.

Pence noted that US President Donald Trump has "led a coalition of 50 nations" who recognized opposition leader Juan Guaido as an "interim president" of Venezuela. The US "continued to bring economic and diplomatic pressure" on Venezuela and "its patrons" in Cuba.

When asked about the possibility of a military invasion, Pence repeated a favorite mantra of the White House, saying that "all options are on the table."

"All options are on the table. The United States is not going to stand idly by while Venezuela continues to collapse into tyranny and deprivation," he said.

According to Pence, three million people left Venezuela, running away from the ongoing crisis, and it is in the best interests of the US to restore "liberty, rule of law and democracy in Venezuela."

"The American people, people around the world, people of Venezuela can be confident President Trump and our administration are going to stand firm until we see freedom restored in Venezuela," he said, without offering specifics.

The US maintains an ambiguous position regarding military intervention, despite US National Security Advisor John Bolton repeatedly claiming that "all options are on the table."

© REUTERS / Ueslei Marcelino
Maduro Vows to Devote His ‘Whole Life’ to People of Venezuela
As an attending journalist noted, however, "it seems like [the US has] stalled out with Guaido." According to the journalist, if the US does not take military action against Venezuela, the alternative will be to "let the status quo maintain" as did the US "through the Chavez era."

On 30 April, Guaido attempted to stage a coup to oust President Maduro. However, his plans failed, and the Armed Forces pledged loyalty to the elected president. Maduro accused the opposition of sabotaging infrastructure in order to sow chaos and unrest across the nation, including an attack on the Guri hydroelectric dam, which plunged the nation into a massive blackout.

Russia and China are among those who recognize Maduro as the legitimate leader of the Latin American country.