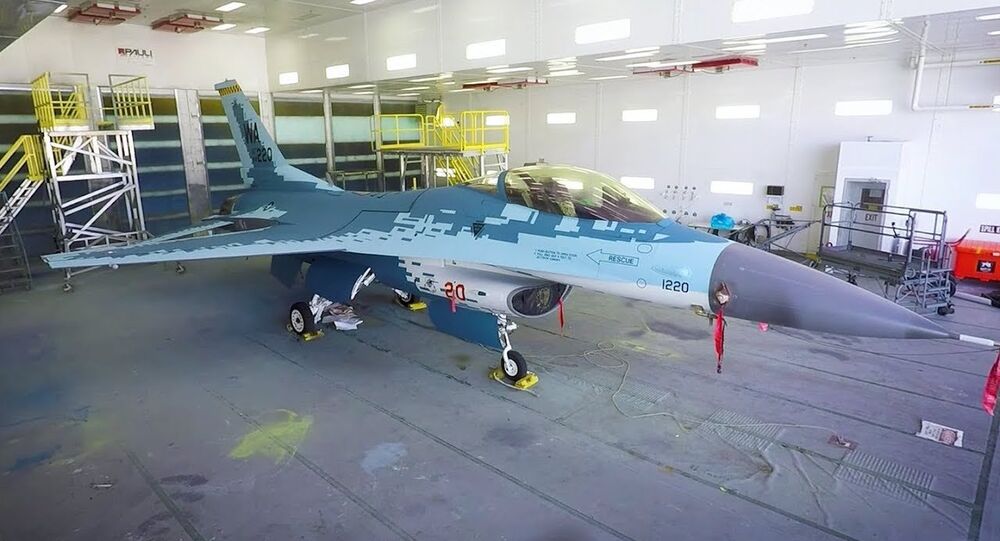 It remains unclear, though, how a US fourth-generation fighter jet will be able to simulate all of the advanced capabilities of the Su-57, a Russian fifth-generation warplane, particularly given the fact that the aircraft is decked out with a special paint to avoid radar detection; the paint’s composition understandably has not been revealed.

The US Air Force’s 64th Aggressor Squadron based at the Nellis Air Force Base in Nevada has rolled out its first fighter jet, an F-16C Fighting Falcon, in the digital pixelated camouflage paint scheme of the Russian Su-57 stealth fighter.

“A new adversary has arrived. The GHOST is here! Be afraid!” a post on the Nellis Air Force Base’ Facebook page reads.

The “aggressor” planes are specifically designed to “realistically simulate” air combat against “probable enemies”, with other details including tactics, procedures, and enemy SAM fire all replicated in drills and based on US intelligence data, according to US media.

The news outlets cited Brig. Gen. Robert Novotny, a commander at the base, as saying that this is an effective way to combat the so-called “hunting fever” of US pilots who can allegedly fall into a stupor at the sight of a new target.

Given that the Su-57 is decked out with a special paint to avoid radar detection, whose composition has never been revealed, it is still unclear how the fourth-generation F-16C will be able to simulate all of the advanced capabilities of the Russian fifth-generation plane.

Painting aircraft to look like potential Russian, Chinese, Iranian and other adversaries is not uncommon for the US Air Force. Since the Cold War, the US Air Force has also accumulated a sizeable collection of such aircraft at bases scattered across Alaska, Nevada, Virginia and Florida.

Zvezda
WATCH Never-Before-Seen Footage of Testing of Su-57 Jet's Stealth Capabilities
Developed by Russia's Sukhoi Company, the Su-57 is a stealth multi-role fighter jet designed for air superiority and attack roles. It is equipped with an advanced avionics system and airborne active phased array radar as well as with a variety of high-precision weaponry. The first mass-produced fifth-generation Su-57 jet is due to enter service in the Russian Aerospace Forces later this year.

In a separate development in May, a military blogger posted a satellite photo of what he claimed was a Russian S-300 missile system operating at a test range “somewhere” in the US.

The blogger did not specify the alleged system's location, with no further information known about whether it was operational or merely a mockup. He deleted the original post after it started to be picked up by Russian media.