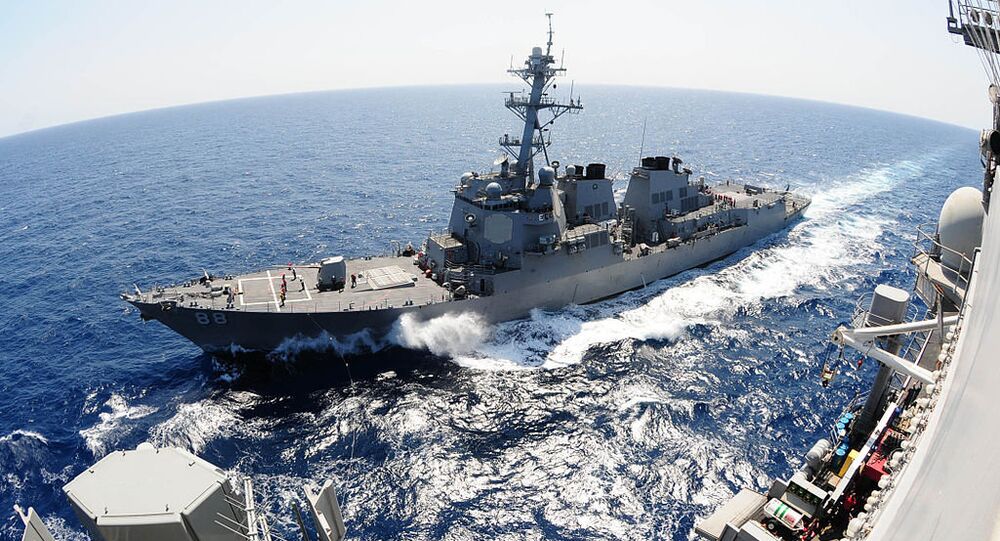 The disputed South China Sea is just one of a number of flashpoints in the US-China relationship, which also include a raging trade war, with Washington imposing new tariffs and Beijing responding with tit-for-tat measures last week, as well as the US blacklisting Huawei tech giant.

The Chinese Foreign Ministry spokesman has accused the US of violating Chinese sovereignty as a US destroyer sailed in the South China Sea against the backdrop of spiralling tension between the world's two largest economies.

According to Lu Kang, navy vessels of China’s People's Liberation Army identified the destroyer and issued a subsequent warning. “I must emphasise that the actions of the American vessel violated the sovereignty of China, as well as threatening peace, security and order in the waters concerned.”

China has condemned this act and expressed strong protest in this regard, the official added.

© Sputnik / Igor Zarembo
China Launches Two New Missile Destroyers Amid US Show of Force in S China Sea
“We strongly urge the United States to put an end to such provocations. China will continue to take all necessary measures to protect its national sovereignty and security, as well as maintain peace and stability in the South China Sea,” he concluded.

Earlier in the day, the US military said in a statement that the US guided-missile destroyer Preble had sailed near the disputed Scarborough Shoal, claimed by China in the South China Sea.

"Preble sailed within 12 nautical miles of Scarborough Reef in order to challenge excessive maritime claims and preserve access to the waterways, as governed by international law," Commander Clay Doss, a spokesman for the Seventh Fleet, told Reuters.

The US military operation was the second of this kind within the span of a month and the latest attempt to counter what Washington sees as Beijing's efforts to limit freedom of navigation in the strategic waters, where Chinese, Japanese and some Southeast Asian navies operate.

The US has also voiced concern over China's construction of industrial outposts and military facilities on artificial islands in the South China Sea, with Beijing saying that it has the sovereign right to send troops to any part of its territory, and defending its construction as vital for self-defence.

© CC0
US Admiral Urges Australia, Indonesia to Counter Beijing in South China Sea
China has repeatedly accused the US of carrying out provocations in the South China Sea, warning the country against sending vessels and warplanes close to the islands and reefs claimed by Beijing, urging its economic rival to “stop actions that undermine China's sovereignty and security interests”.

China claims almost all of the strategic South China Sea and frequently rails against the United States and its allies over naval operations conducted near Chinese-claimed islands. Vietnam, the Philippines, Brunei, Malaysia, Indonesia and Taiwan all have competing claims in the region as well.

The disputed South China Sea is just one of a growing number of flashpoints in the US-China relationship, which also include a trade tug-of-war.

In response to new US tariffs announced by President Donald Trump amid trade talks, China has adopted a more tough stance in its trade war and slapped the United States with tit-for-tat measures, stating the resumption of talks between the two economies would be pointless unless Washington revised its course.

In addition to this, last week the United States announced telecoms equipment maker Huawei Technologies Co Ltd would be placed on a blacklist that could make it extremely difficult for the company to do business with the US in a move slammed by Beijing.

Nevertheless, Chinese foreign ministry spokesman Lu Kang, when asked about state media reports suggesting there would be no more trade negotiations, responded that China always sought to resolve disputes with the United States via dialogue.