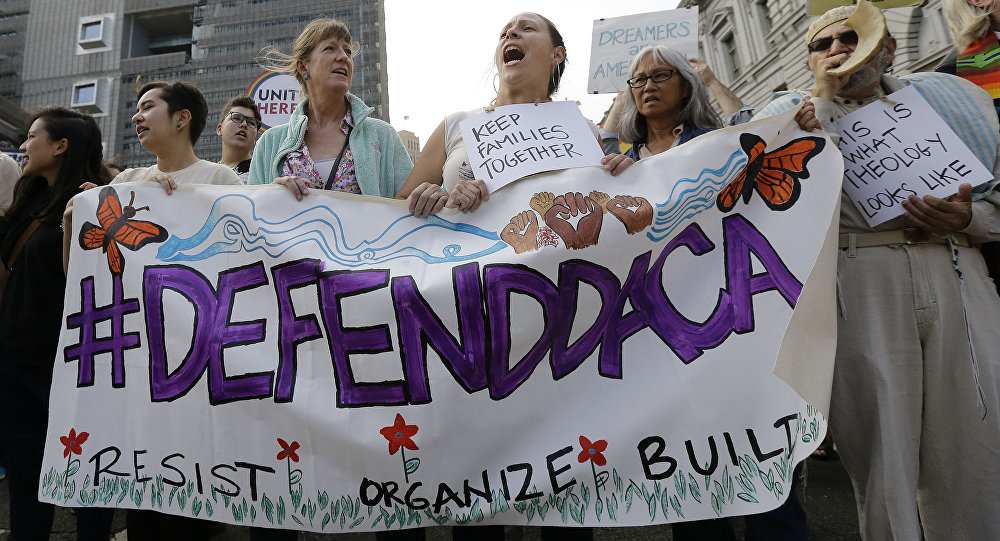 WASHINGTON (Sputnik) - A US federal court of appeals in the state of Virginia has ruled that the Trump administration's decision to end the Deferred Action for Childhood Arrivals (DACA) immigration program was unlawful, media reported on Friday.

The Fourth Circuit Court of Appeals has ruled that the Trump administration did not adequately explain its decision to rescind the DACA program, The Hill reports.

DACA permits children of illegal immigrants, who were brought in the United States under the age of 16, to remain in the country provided they had arrived by 2007 and to obtain working permits. The DACA program, if maintained in force, protects 700,000 young people from being deported from the United States.

In January, the US Supreme Court refused to hear the Trump administration's appeal against lower court decisions upholding DACA thereby allowing the program to continue for at least ten months.

Mr Trump then said he was ready to give migrants covered by DACA and those holding Temporary Protected Status (TPS) a three-year reprieve from deportation in exchange for $5.7 billion in border security funds. But Democratic House Speaker Nancy Pelosi rejected that concession and urged for a permanent solution for DACA and TPS recipients.

READ MORE: 'Bad Hombres' Are Being Detained And Will Be Sent Home — Donald Trump

Donald Trump has been pushing for changes in DACA program since the migration crisis flared up on the country's southern border last autumn when a caravan which included thousands of people from Central American countries reached the US. According to the recent data from Customs and Border Protection, more than 109,000 migrants were apprehended or turned away while attempting to cross the border in April.