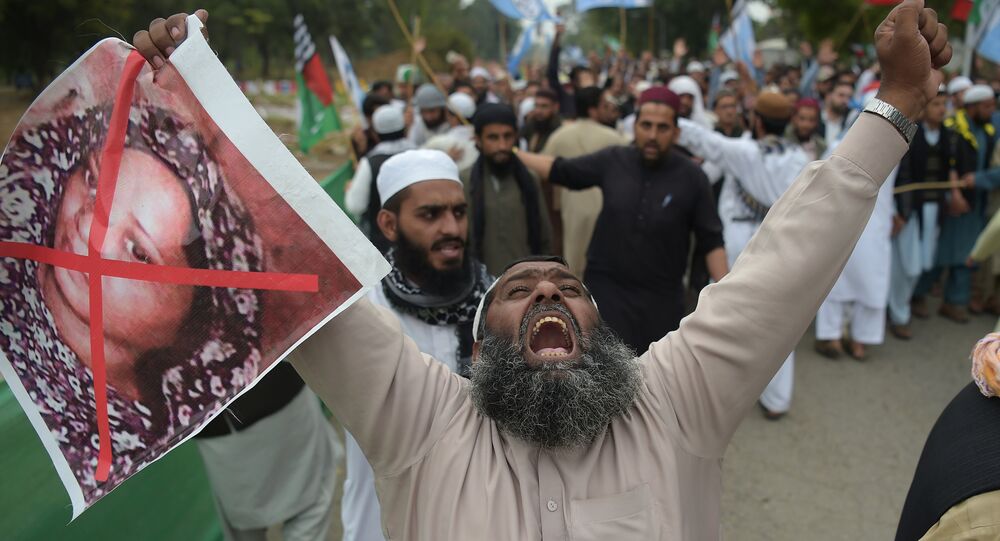 Asia Bibi spent nine years on death row in a Pakistani prison after being falsely accused of blasphemy – a grave crime in the South Asian country. In 2018, she was finally acquitted and released to the great displeasure of many in a conservative region of the Islamic country.

An unidentified Islamist has published a video in which he claims to have followed Asia Bibi, a Christian who barely escaped hanging in her homeland of Pakistan over blasphemy accusations, to Canada with the intent to murder her. The anonymous individual insists in the video that "blasphemer" Asia Bibi would receive an award in Canada and would repeat her sacrilegious statements on Islam.

"To stop this act and to give Asia a terrible death and to send her to hell I have also reached Canada last night", he said.

Muslim zealot claims to have flown to Canada for the express purpose of murdering Asia Bibi pic.twitter.com/EqcAPyXdnF

The man didn't show his face in the video and didn't specify whether he was acting on behalf of a particular group. Canadian authorities haven't commented on the threats against Asia Bibi, who lives at an undisclosed location since leaving Pakistan for fear of her life.

Asia Bibi, a Christian, was arrested in her homeland after a row with a colleague in 2009, which resulted in the latter accusing her of blasphemy against the Prophet Muhammad. The argument began after Bibi drank from a well that was supposed to be for Muslims only.

In 2010, a court sentenced Asia Bibi to death over blasphemy accusations — a grave crime in Pakistan. The girl denied being guilty and struggled to appeal the decision. Eight years later, the court ruled that there was not enough evidence to prove her guilt and released her from prison.

The decision, however, was not well received by local Islamists, clergy, and conservative Pakistanis, who called for her execution. Muslim cleric Maulana Yousaf Qureshie even set up a bounty on Asia Bibi, promising to pay 500,000 Pakistani rupees ($3,500) to anyone who kills her.

The news of an Islamist possibly following Bibi to Canada appeared over a year after Canadian Prime Minister Justin Trudeau announced an open door policy on immigration, welcoming everyone who was forced out of their homelands for various reasons into the country. The decision spurred security concerns in the North American nation.