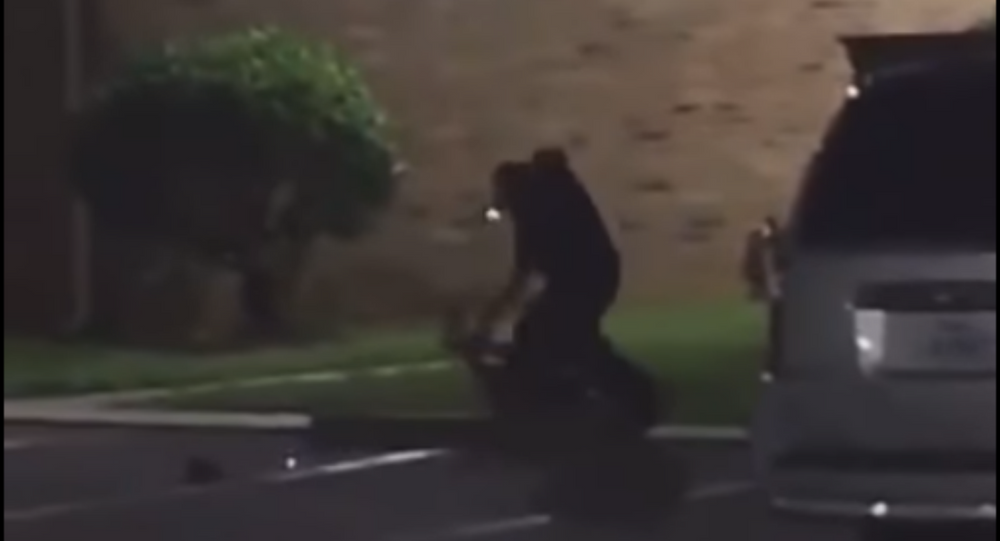 An officer with Texas' Baytown Police Department came under fire this week after cellphone video surfaced showing him discharging his department-issued firearm five times during a confrontation with woman believed to be pregnant. The woman died at the scene.

The officer-involved shooting incident unfolded at the Brixton Apartment complex in Baytown, Texas, at roughly 10:40 p.m. local time on Monday. Local media reports indicate that the unidentified officer, who is an 11-year veteran with the force, initially approached 44-year-old Pamela Turner because he knew multiple warrants had been issued for her arrest for prior alleged offenses.

Video of the altercation shows that things quickly escalated between the officer and Turner as the law enforcement official attempted to place Turner in handcuffs. At that time, she can be heard yelling out to the officer that she was simply walking home.

The two eventually land on the ground, with the officer standing over Turner, after the officer's stun gun is deployed. "Why? Why? I didn't do anything to you," Turner says as the struggle continues.

"I'm pregnant," are the last words that Turner yells before the officer discharges his firearm. Video of the deadly confrontation cuts off seconds after Turner's body slumps to the ground.

A statement released by the department's Lt. Steve Dorris reveals that during the struggle Turner somehow managed to gain control of the officer's stun gun and deploy it on him. It was this move that ultimately prompted the officer to fire multiple bullets at Turner. The release goes on to note that Turner was pronounced dead at that scene and that she was struck at least once.

Antoinette, Turner's sister, told local station KPRC that the officer was her sister's neighbor and that her sibling had previously filed complaints against the cop for harassing her. She also revealed that her sister was on medication for schizophrenia. Antoinette was unable to confirm whether Turner was pregnant.

Officials have not yet confirmed whether the officer did in fact live near Turner or if complaints had been filed by Turner.

Residents of the apartment complex told the station that Turner was harmless and that she typically just walked around the neighborhood with her pet. "She would walk her dog. That's all she did was walk her dog and pick up trash… She didn't mess with anybody. It was just her and her dog," resident Jonathan Little said.

Investigators are reportedly attempting to get in contact with the individual who recorded the confrontation and shared it on social media. Dorris told reporters on the scene that he was shocked someone recorded the event.

"It's unfortunate that somebody takes a tragic incident like this and posts it on social media," Dorris said. "It's extremely disrespectful for everybody involved, but that's the day and age we live in with social media."

It's unclear whether the officer involved in the incident captured the events on his bodycam.

Per department policy, the officer has been placed on three days of paid administrative leave, the Baytown reported. The shooting is also being investigated by officials with the Harris County District Attorney's Office.