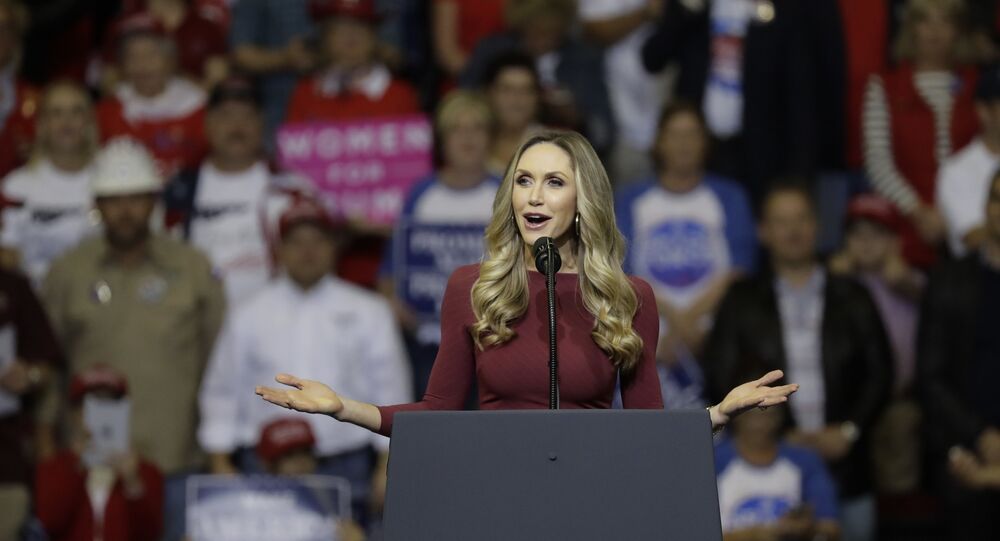 Speaking at Fox News' Watters' World show Saturday, the US president's daughter-in-law and his 2020 campaign senior adviser Lara Trump touched upon a variety of questions, including the US Democratic party, Attorney General William Bar's alleged contempt, training Democrats were receiving to "defend their positions" at Fox News shows among others.

The interview started with a brief discussion of the Democrats idea to impeach Donald Trump as they purportedly "can't beat him."

"It's like a gift. They just keep giving us gifts. Whether it's the Green New Deal, I mean socialism, as you see the 10 per cent of Americans think it's a great idea and the 90 per cent of us out there that actually think — understand that it's a terrible idea,' Lara said. "So whether they are going to impeach him, the redistricting, they are going to abolish the electoral college now — they know they can't beat him, so, I don't know, they are a mess, but we love it, let them keep going."

"It's unbelievable, and by the way, William Bar was the man who was so well respected by Democrats, by Republicans. For so many years he has been part of this group of people in Washington DC. Not until he is the Attorney General under president Donald J. Trump does everybody decide — wait a minute this guy has got to go. I mean, it's crazy," said Lara.

Then Lara briefly commented on the outcome of the Mueller report, highlighting that she simply doesn't know what the goal of actions the Democrats undertook against Trump after the Mueller report was released.

"It's so sad, and, you know, no matter what they do — whether they are harassing our Attorney General, they are harassing my brother-in-law, the president — it's not going to change the outcome of the Mueller report. We still didn't collude with Russia, the president still didn't collude with Russia. I don't know what the goal is here."

Switching to the 2020 campaign, Donald's daughter-in-law touched upon nicknames Donald Trump gave to Joe Biden and Bernie Sanders, switching to the latter's proposal to give the healthcare to illegal immigrants.

"When he gives these monikers to people — Sleepy Joe or Crazy Bernie — they tend to stick. You look at the 2016 elections, and it really turned out badly for some people. I mean, they are still," she said. "Well, the problem is that is why people are going to vote for Donald Trump again. Because the American people don't think that is a good idea. I can guarantee you that. And they want somebody who has the guts, on TV, on the record say — wait a minute — a terrible idea, why are we going to do that, when we can barely take care of our own? We have got to take care of our own people first and then figure out how to deal with the rest of these people."

"We have now had people that have gone to Capitol Hill and that are doing training sessions for Democrats so they can appear on Fox News. They are giving them advice on how to handle themselves on Fox News. And I am thinking to myself — how much of a bubble are Democrats living in, when they not even used to having someone challenge their policies that they need the training to defend their positions," Fox News' host Jesse Watters argued.

"Well, and also guess how much media training anyone in our family got? Absolute zero, Jesse. Honestly and truthfully, so, I guess they are trying to figure out how to "sneak a few past" the American people when they come on Fox News. I hope they come on this show, I would like to see that," Lara Trump replied.