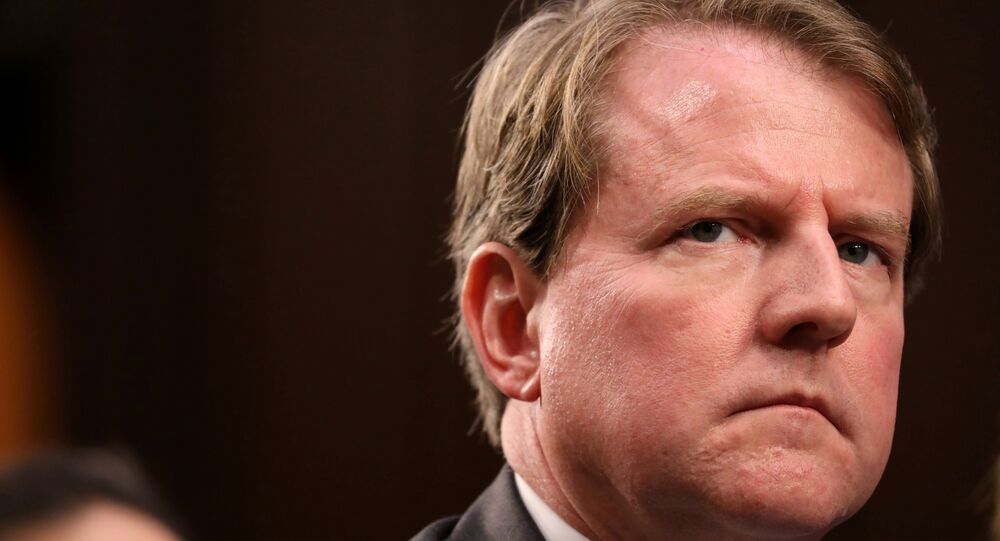 US President Donald Trump wrote on Twitter Saturday that Special Counsel Robert Mueller "was allowed to finish his Report with unprecedented help from the Trump Administration".

The statement follows a Friday report made by The Wall Street Journal that former White House Counsel Don McGahn declined to state publicly — at the request of the US administration — that he did not believe the US president obstructed justice when Trump allegedly ordered McGahn to seek the dismissal of Mueller in June 2017.

I was NOT going to fire Bob Mueller, and did not fire Bob Mueller. In fact, he was allowed to finish his Report with unprecedented help from the Trump Administration. Actually, lawyer Don McGahn had a much better chance of being fired than Mueller. Never a big fan!

Don McGahn resigned as the White House's top lawyer last October. According to the US-based media reports, the Ex-White House Counsel was one of the key witnesses during Robert Mueller's investigation into the alleged Russian meddling in the 2016 US election.

© AP Photo / Patrick Semansky
US House Committee May Hold Barr in Contempt Over Mueller Report - Chairman
On Tuesday, McGahn refused to comply with a congressional subpoena from the House Judiciary Committee to produce documents having to do with Mueller’s probe. White House Counsel Pat Cipollone said in a letter to the Judiciary Committee on Tuesday, that McGahn's record remains legally protected from disclosure.

© AP Photo / Alex Brandon
Users Slam Hillary Clinton for Impersonating Trump While Reading Mueller Report
The Mueller report — released earlier by the US Department of Justice — found no evidence of collusion between Trump and his campaign with Russia in the 2016 US presidential election campaign. However, Mueller described ten episodes that may constitute obstruction of justice by the US president.