MOSCOW (Sputnik) - The US government turned off water in the Venezuelan Embassy in Washington on Saturday in order to force the Embassy Protection Collective mission, uniting several antiwar groups, to leave the building, Medea Benjamin, a co-founder of the international human rights groups Global Exchange and Code Pink: Women for Peace, said.

"Now the US govt [government] has turned off the water in the Venezuela Embassy to smoke us out. No lights, no water, little food. This is how Big Brother tries to crush other countries as well. We remain firm. Send love to #embassyprotectioncollective #HandsOffVenezeula," Benjamin wrote on Twitter.

Now the US govt has turned off the water in the Venezuela Embassy to smoke us out. No lights, no water, little food. This is how Big Brother tries to crush other countries as well. We remain firm. Send love to #embassyprotectioncollective #HandsOffVenezeula

© REUTERS / Carlos Garcia Rawlins
Ex-Venezuela Intel Chief Slammed as 'CIA Spy' by Maduro, Claims Trump Said 'No' to Request to Lift Sanctions
​She voiced the belief that the struggle of the Embassy Protection Collective would go down in history, stressing that activists were trying to stop "a coup, a US invasion and a civil war."

Activists from the Embassy Protection Collective have been staying inside the embassy since April, with the permission of the Venezuelan Foreign Ministry. They support Venezuelan President Nicolas Maduro amid US-backed opposition's attempts to oust him from power. The activists' staying in the embassy is motivated by their desire to prevent representatives of Venezuelan opposition leader Juan Guaido from taking over the mission. Over the past week, clashes between activists occupying the embassy and Venezuelans camping outside the building escalated, resulting in nine arrests. 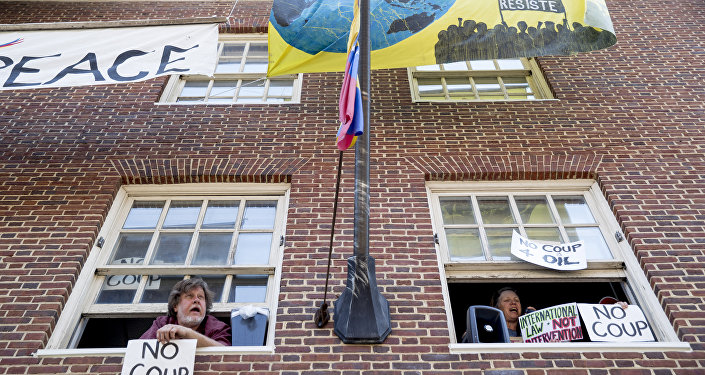 © AP Photo / Andrew Harnik
‘People Power Will Win This’: Activists Rally to Protect Venezuelan Embassy in DC Despite Setbacks
Venezuela has been rocked by unrest since January, when Guaido proclaimed himself the country’s interim president and was recognized by the United States and dozens of other nations.

Maduro, recognized by China and Russia among numerous other countries, has accused the United States of seeking to overthrow his government and install Guaido in a bid to get hold of Venezuela's natural resources.

Guaido made a fresh attempt to depose Maduro on April 30, staging a demonstration in front of La Carlota military base in Caracas. However, the attempt has "failed completely," as the Venezuelan government has put it.