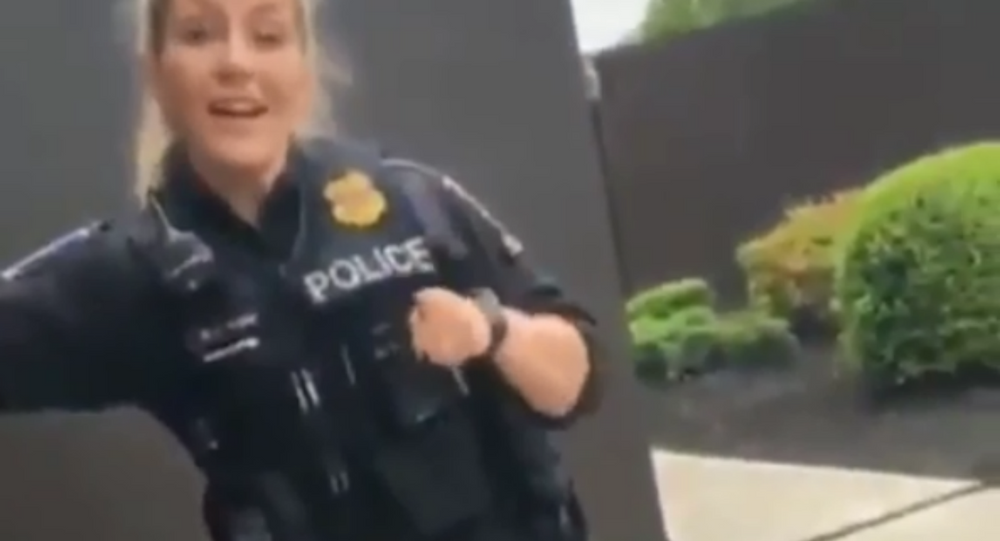 Maryland's Montgomery County Police Department released late Thursday body-worn camera footage showing the altercation in which an on-duty officer opted to use a racial slur against several individuals being questioned during a loitering investigation.

The incident unfolded earlier on in the day at roughly 10:36 a.m. local time outside of a McDonald's restaurant in White Oak, an unincorporated area of Montgomery County. A statement from MCPD states that officers were dispatched to the area after receiving reports that four African-American men were loitering outside of the establishment.

Once police arrived on the scene, Barry Tucker, one of the four men apprehended, began livestreaming the interaction, remarking throughout the broadcast that officers were harassing the group and that they'd done nothing wrong and were just waiting to be picked up for work.

​However, the most shocking portion of the video came toward the end, when a female officer refers to the group as "n****s," informing them that more officers on the scene means that paperwork will be written up faster, and that they will be allowed to go on their way sooner. At least six officers were on the scene.

Tucker told local station NBC 4 that he just "could not believe" what he heard or how the officer reacted. "I couldn't believe [the] face that she made. She thought it was actually a cool thing to say, and it's not. She even said it was appropriate," he said.

Bodycam footage released by the department shows that throughout the entire time that the men are being questioned, patted down and asked to fork over their state identification cards, the offending female officer appears to provoke the group.

She can be heard repeatedly calling the individuals "sweetheart," insisting that they're "best friends," and criticizing one of the men's style of speech, later saying, "oh, now we're talking English."

​At one point in the recording, the officer tells one of the detainees that "some day when you grow up maybe you'll be less angry." After the individual replies by calling the cops "d**keaters," the female officer continues the conversation by saying, "it's good to be something."

Although Tucker's cellphone footage cuts off right after the "n****s" remark, the department-released video captures the moment in which the female officer explains that she was simply quoting Tucker.

"I would still say it [even if I didn't have my badge on] because what I'm doing is repeating your words," the officer says after laughing off the matter. The video cuts off moments later.

Prior to the release of the bodycam footage, MCPD released a statement, revealing that they were aware of Tucker's recording and that the matter was being reviewed.

​"The matter brought to our attention today is disturbing and contrary to our department's values and our overarching mission to fairly and impartially serve our community," reads the statement released late Thursday along with the bodycam footage.

"The statements observed on the social media video clip are contrary to our extensive training curriculum that includes implicit bias training and other training programs to ensure fair, unbiased, and non-discriminatory policing in our community."

"We sincerely regret the disturbing nature of this video. We understand the pain such language causes the entire community," it adds.

The matter is still under investigation. Police did issue two citations for marijuana possession, and all four men were cited for trespassing. It's unclear if the officer has been placed on suspension during the review.