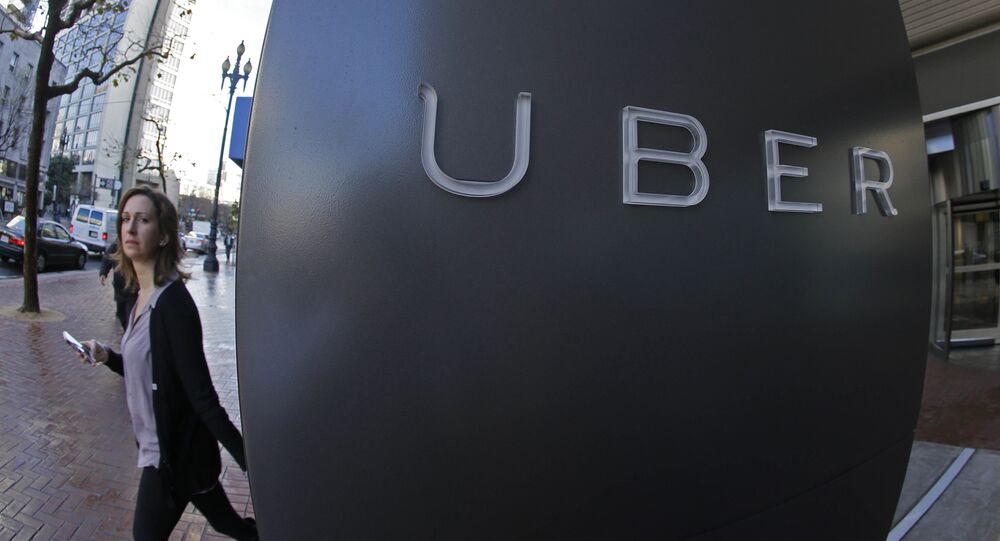 Drivers with the ridesharing companies Uber and Lyft staged a strike Wednesday in several US cities. They say they have little job security and are underpaid, as the companies have scaled back pay rates despite massive growth. Now, both companies are going public, and the drivers have had enough.

In New York and Los Angeles, drivers staged work stoppages, urging their fellow Lyft and Uber drivers to turn off the apps they use to pick up customers in order to pressure the companies into raising the wages of their employees, as well as providing a process for termination instead of simply being discharged without an investigation and an end to up-front pricing on the app, which they call a "scam."

​"I'm striking because Uber has broken their promises to drivers time and again. I started driving for Uber when they first came to New York City," Uber driver Syed Ali, who is also a member of the New York Taxi Workers Alliance labor union, said in a union press release Wednesday about the strike. "We were excited about the new app technology and promises for good incomes. They called us partners, and it seemed like it was going to be a great job, and I was looking forward to a better future."

"At first it was good money. But then Uber cut our rates, and they tried to tell us we'd be earning more even though they paid us less. What kind of craziness is that? Then they demoted the class of car I drive — even after I borrowed money to get my vehicle — so I could no longer do UberBlack and so my income went down even more," Ali said.

"When I started Uber was worth about $200 million," Ali said. "Now they are valuated at around $100 billion. They have grown and grown and gotten richer and richer, but I haven't grown with the company. My condition as an Uber driver has gotten worse and worse."

Web developer and technologist Chris Garaffa, who is also a part-time Lyft driver, told Radio Sputnik's Loud and Clear Wednesday that the company keeps about half of what the customer pays, with the other half going to the driver, "even though I'm doing the work, I'm putting the gas in my car, paying my insurance, and all of that, and putting the wear and tear on my car. Lyft provides nothing of value outside of the app that's already built in that infrastructure."

Uber's imminent initial public offering was the precipitating factor for the strike: the company plans on selling shares at $47 a pop — one of the biggest IPOs of all time, according to the New York Times. Lyft went public in late March.

Protesters demonstrated in solidarity with the strikers in cities including Boston, Philadelphia, Atlanta, Chicago and Washington, DC, as well as outside Uber headquarters in San Francisco.

The scene on Market Street, as the #UberLyftProtest has shut things down outside Uber HQ. pic.twitter.com/QtkJqWaZaW

​Another driver, Inder Parmar, told USA Today he'd been driving for Uber since 2013, during which time he'd seen his income thirded.

"When I'm on call for 12 hours, minus my expenses, I literally go home with zero dollars," Parmar said. "I have to pay for my gas, car and I have to support my family. With this money I cannot survive."

The protesters have demanded that drivers be guaranteed 85% of the fares their customers pay and that the company end the practice of up-front pricing, which awards money based on a per-minute rate and not a per-mile rate. Drivers say this doesn't correspond with how much either party spends, but that the company profits enormously.

The strikers also want an end to unfair deactivations, when the company fires an employee by turning off their access to the app — something they say happens without any investigation.

Drivers can be deactivated if their ratings fall below a certain threshold or if they have too many cancelled rides; complaints made through the app about violence, discrimination or harassment can also result in a deactivation.

"We are exploring ways to create an appeals process for the most contentious cases," Uber says on its website. Both Uber and Lyft rejected the notion that their drivers' livelihoods were endangered by their payment schemes.

Garaffa said that people doing at least part-time work in the "gig economy," doing piecemeal jobs like ride-sharing, is common in today's world. "So many people I know who have one or two other part-time jobs who also drive [for Uber or Lyft], because it's a way to not have to wait for a paycheck every two weeks." However, that camouflages the associated costs of the job, such as gas costs or taxes.

"We're actually not employees of these companies, we are classified as ‘independent contractors,' so Uber and Lyft don't even take taxes, as a standard job would, and we're responsible for those every quarter, if you make enough, not just on April 15," when income taxes for the previous year are due in the United States, Garaffa told hosts Brian Becker and John Kiriakou.

While USA Today noted that the protests didn't seem to be making a significant dent in driver availability, some reported that they didn't participate in the strike because they didn't know about it.

"A lot of them don't know about this," 59-year-old Uber driver Laurel Hirschmann of Los Angeles told USA Today. "Ninety-eight percent of the drivers are as outraged as we are."

However, Garaffa said the strike was getting a lot of media attention, which might counteract the low participation rate. He noted that Lyft's Nasdaq value was down by 7% Wednesday, which he said puts Uber "on notice."