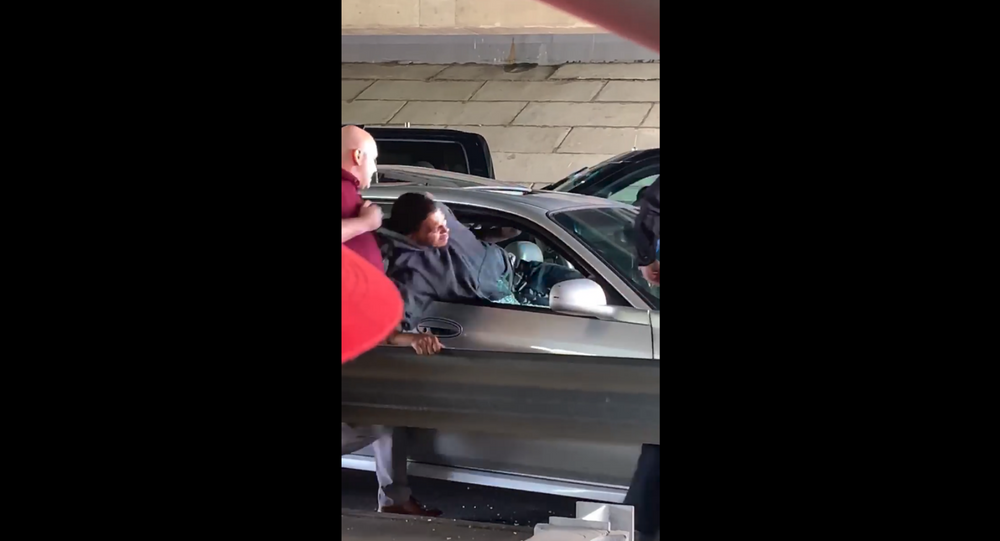 Missouri's St. Ann Police Department came under fire this week after cellphone video surfaced showing a detective smashing through a car window before yanking an unarmed passenger from the vehicle.

Screenshot/The Battousai
WATCH: US Cop Tackles, Handcuffs Woman Who Called 911 to Report Threats
Video footage of the Tuesday confrontation was filmed and later shared on social media by Lisa Jones Watson, a local resident who was driving past the scene as officers approached the wanted vehicle on foot.

It's at the video's 14-second mark that things heat up, as a detective breaks the front passenger window by striking it with his forearm three times. He then pulls the passenger out of the vehicle and pushes him onto the ground, forcing him to lie on shards of glass.

Local media reports indicate that the vehicle caught the attention of police after an officer from a nearby jurisdiction checked the license plate and discovered a warrant in connection to the car. A pursuit ensued after the vehicle entered the jurisdiction of the St. Ann Police Department.

Although reports have suggested that the passenger was unable to open the door because it was jammed, police have stated in a release that the unidentified official broke the window because the passenger "refused to put up his hands, unlock the door, or open the window." However, this notion can be partially disputed by the fact that video shows the man had his hands raised when officers approached him.

Screenshot/707_Dre
WATCH: US Woman Body-Slammed by Cop After Filming Arrest of Relatives

"I know what we saw, and it did not seem justified to me to drag him through broken glass the way they did. He was a passenger, not the driver," Watson wrote in a separate post. "Look at the beginning of video, his hands were up and he was afraid."

"None of you would want this to happen to your child. I know I wouldn't. Before I began recording, the guns were drawn, and the passenger had tried to surrender peacefully," she added.

In the eyes of law enforcement officials, however, the end justified the means in this particular confrontation.

"Because it was a dangerous situation, with numerous officers involved and people driving by, our officers had to protect themselves and the public by ensuring that no weapons were going to be used," reads a release from the department. "The passenger's refusal to cooperate caused a St. Ann detective to break the window."

Police say that neither the officers nor the passengers in the vehicle suffered any injuries. Police Chief Aaron Jimenez told the St. Louis Post-Dispatch Wednesday that the driver and a backseat passenger were arrested. It's unclear if the front passenger was taken into custody. He added that officials are looking into filing charges.

‘You Told Me To': US Cop Kills Man as He Complies With Demands to Disarm (VIDEO)

US Cop Recorded Detainee’s Genitals, Demanded Another ‘Twerk’ for Camera

‘Making Babies Back There': US Cop Suspended for Letting Detainees Get Frisky