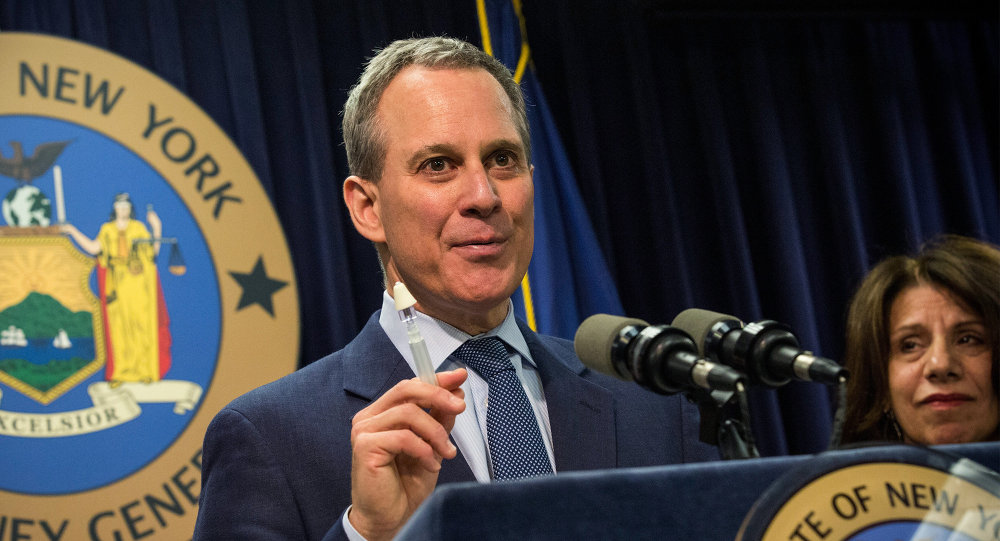 Each woman abused by Schneiderman said they felt duped by his public image as a progressive champion of women's rights, particularly his role in prosecuting now-shamed Hollywood producer Harvey Weinstein.

Selvaratnam said the victory severely dented Schneiderman's ego, as he was a prominent anti-Trump voice.

The Washington Post reports Schneiderman's abuse "seemed to worsen" after the election, concurrent with Schneiderman "burnishing his reputation"as one of the President's most public detractors.

© AFP 2019 / Loic VENANCE
Police Seek to Contact Argento's "Abuse Victim" Amid 'Hypocrisy' Criticism by Weinstein Lawyer
"I was seeing behind the scenes it was kind of smoke and mirrors, his ability to actually take down the President. I was disillusioned on many levels — with him as a person and as a politician. People would literally be coming up to him and saying: ‘save us'.I witnessed this time and time again. In the back of my mind, I'd think, do they have any idea what he does to me at home?" Selvaratnam told the paper.

Schneiderman, who positioned himself as a champion of the ‘#MeToo' movement, resigned in May 2018 after four women — including Selvaratnam — with whom he'd had romantic relations accused him of committing non-consensual physical violence and threatening to kill them if they ever broke up with him, among other abusive behaviour. He initially denied the allegations, but later admitted his actions after prosecutors opted not to press charges against him.

Michelle Manning Barish, who was in a relationship with Schneiderman for almost two years, alleges was called a number of derogatory sobriquets — including "whore" — and was slapped across the face and ear, and held down and choked, by Schneiderman during a drunken rage.

The slap caused lasting damage to her ear — she also accuses him of "emotionally battering" her and controlling her appearance via cruel remarks about her weight.

Another woman, who wished to remain anonymous, said Schneiderman once slapped her so hard a handprint was left on her face.

Wikimedia Commons/Angelica Martinez
Mexican Musician Commits Suicide Hours After #MeToo Accusations
"You cannot be a champion of women when you are hitting them and choking them in bed, and saying to them, ‘You're a fucking whore'. How can you put a perpetrator in charge of the country's most important sexual-assault case?"His hypocrisy is epic. He's fooled so many people," Barish told The New Yorker.

Selvaratnam said she didn't regret coming forward, and is now working on a book to help other victims of abuse.