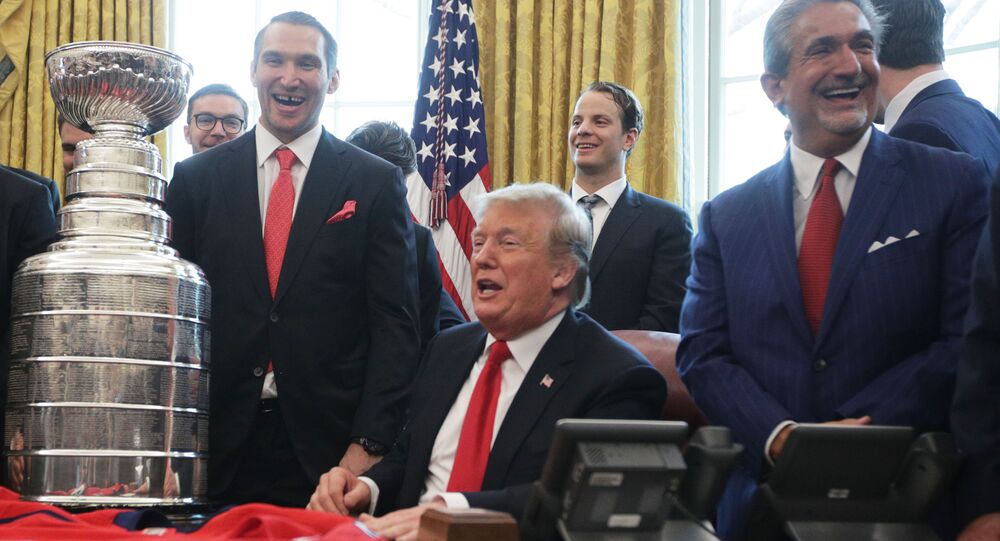 After the NHL’s Washington Capitals led by Russian hockey icon Alexander Ovechkin won a hard earned Stanley Cup back in 2018, Trump honoured the long-standing tradition of presidents congratulating winning teams at the White House, to the pride and joy of the victorious hockey players.

In an interview with the Russian sport news portal Sport24 Dmitry Orlov, a Russian defenceman for the Washington Capitals in the National Hockey League (NHL), has shared a number of details about his team’s visit to the Oval Office after they grabbed the Stanley Cup in 2018.

The athlete billed the meeting with POTUS Donald Trump an unforgettable experience, noting that their invitation to the White House points to what a big mission the Caps accomplished last season, arguing they now have a perfect memory to cherish once they complete their sporting careers.

The defenceman also eagerly depicted the American president asserting that “he has his own vibes, and he is a rather cheerful person”, recounting the strikingly light-hearted atmosphere that they found themselves in while in the Oval office. “It shouldn’t be underestimated”, he stressed.

This season, Capitals didn’t manage to defend their title losing 3 games to 4 to the Carolina Hurricanes in the first round of the Stanley Cup playoffs in April. After the matches, Orlov, along with Washington Capitals captain Alex Ovechkin and Evgeny Kuznetsov joined the Russian national squad to prepare for the World Cup in Slovakia, with the competition due to take place from 10 May to 26 May. Russia will take on Norway, Austria, Czech Republic, Italy, Latvia, Switzerland, and Sweden in the group stage of the tournament.