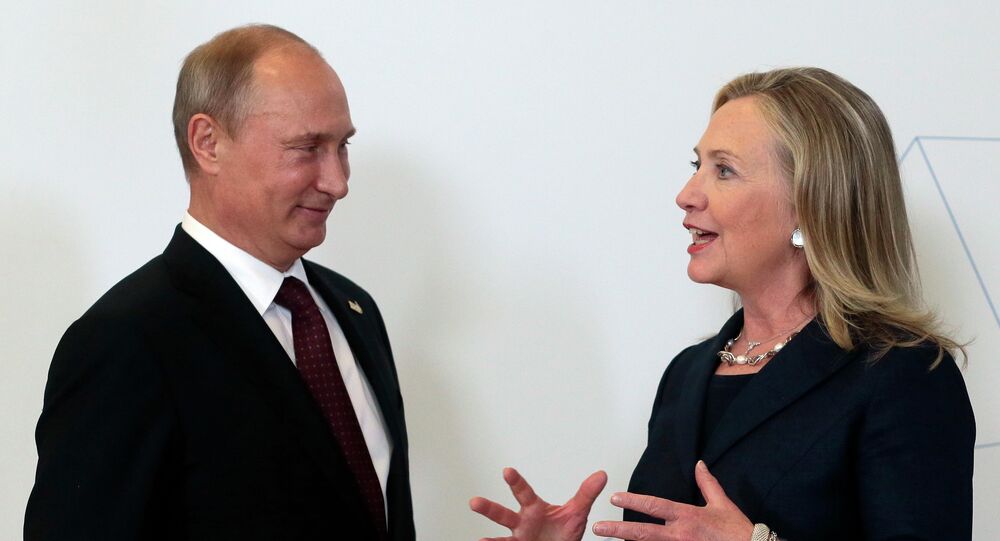 The first phone conversation between Trump and Putin since the publication of the much-discussed results of the two-year-long investigation has drawn a lot of criticism from opponents of the US president. He was specifically slammed for failing to raise the issue of alleged Russian meddling in the 2016 elections during the talk.

Former Secretary of State and opponent of Donald Trump in the 2016 presidential election Hillary Clinton has rebuked the US president for how he handled his telephone conversation with Russian President Vladimir Putin on 3 May. She noted that according to the Mueller report, Moscow had allegedly carried out "systemic interference in [the US] election" and found it unsettling that the president had spent an hour talking with his Russian counterpart without raising the issue, Fox News reported.

"You wake up and your president is spending an hour on the phone with Vladimir Putin, who was the mastermind of the interference and attack on our election", she claimed.

© REUTERS / Carlos Barria
Trump After Phone Talk With Putin: Tremendous Potential for Great Ties With Russia
During her speech, made as a part of a speaking tour with her husband, former President Bill Clinton, she also attacked Attorney General William Barr's handling of the Mueller report, accusing him of acting as "the president's defence lawyer", while suggesting that he should be "the chief law enforcement officer" in the US.

The telephone conversation between the US and Russian presidents drew a lot of public attention. The two discussed a whole array of topics, ranging from the situation in Venezuela to a new nuclear arms accord that would include Russia, China, and the US. They also touched on the issue of the Mueller report, but Trump said that he didn't warn Putin against interfering in the upcoming US election.

READ MORE: Trump Says He Had 'Very Productive Talk' With Putin on Possible Nuclear Accord

The Mueller report was partially published in April 2019, dispelling allegations of collusion between Trump's campaign and Russia. The report, however, claimed that Russian hackers had allegedly interfered in the 2016 election. Moscow insists that it did not meddle in the US election, denying the accusations.