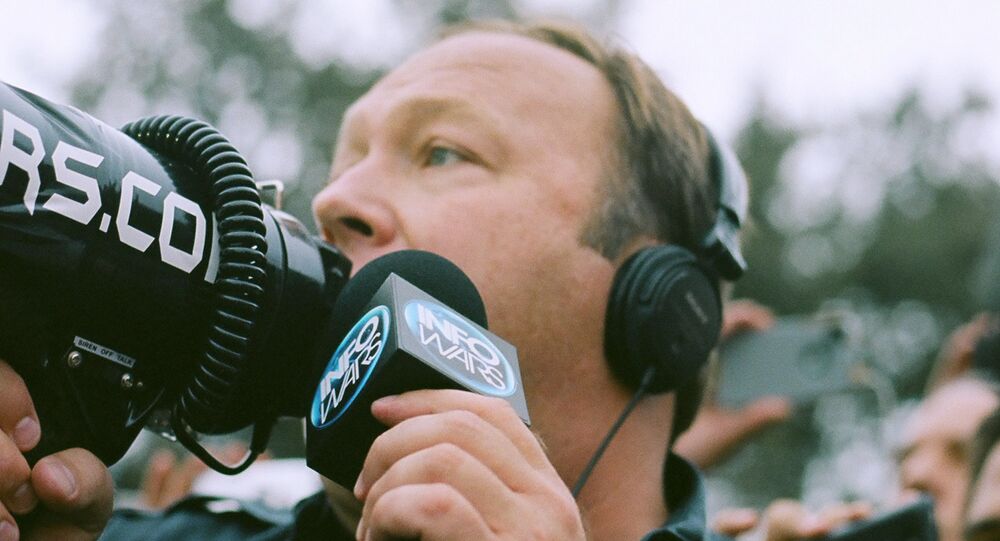 Facebook announced Thursday afternoon that it had banned some high-profile conservative media personalities from all social media platforms the company owns.

© AP Photo / Ben Stevens
Facebook Bans UK Right-Wing Groups: British National Party, EDL & Britain First
The company led by CEO Mark Zuckerberg announced on Thursday that it removed the accounts, fan pages and groups associated with the above individuals from Facebook and Instagram after re-evaluating their content or re-examining their activities outside of Facebook.

Jones and his media outlet InfoWars had previously been banned from Facebook (FB) in August 2018, but had maintained a presence on Instagram, which is owned by Facebook. On Thursday Facebook said that Jones and InfoWars will be barred from Instagram as well.

“We’ve always banned individuals or organizations that promote or engage in violence and hate, regardless of ideology. The process for evaluating potential violators is extensive and it is what led us to our decision to remove these accounts today,” Facebook said in a statement to Fox News.

Some of the individuals who fell under Facebook's rules against "dangerous" individuals and organizations, responded to the ban on their accounts in the brief period between when Facebook announced the ban and when Facebook scrubbed the accounts. Loomer denied in an Instagram post that she ever violated the company's terms of service and asked people to follow her on a different platform, adding, "Looks like you guys will probably never hear from me again." Yiannopoulos also published a final post on Instagram.

Watson used Twitter, from which he has not been banned, to write, "In an authoritarian society controlled by a handful of Silicon Valley giants, all dissent must be purged."

He also noted that Laura Loomer was making “thinly veiled suicide threats because of the way she has been treated” and wrote he hoped her friends would check on her.

Facebook reportedly had been holding an intense discussion on whether to label these individuals as "dangerous" and ban Alex Jones and InfoWars. Business Insider obtained emails showing Facebook executives in a debate over whether or not to take this type of action against Jones.

At the time, a Facebook spokesperson told CNN Business, "As this email correspondence shows, we continually monitor and review whether people are involved in organized hate on our platform. We've already taken down InfoWars' Facebook Page, but Alex Jones has a network of presences online and we are evaluating how to appropriately enforce our policies against him as an individual. We're committed to being diligent and will share an update when that process has run its course."

The conservative twitter users burst with outrage after learning about the latest Facebook's move, calling it a manifestation of censorship before the 2020 elections.

Facebook has gone great lengths to coddle the right and show there is not some anti-right-wing conspiracy at the company. I can think of no better way of undermining this than banning all the high-profile far-right people on your platform at once with a coordinated media release

Libs: "Corporations are the worst and can't be trusted."

Also Libs: "Corporations should have all the power to ban anyone on their platforms that they disagree with."

Make no mistake: Facebook just made a **partisan, ideological** effort to shape global discourse on its platform 18 months before the 2020 election. If there was good faith in this, we would see Facebook's logic and rules more evenly applied across the political spectrum.

Right-wingers are being purged from the internet, banned from donation platforms & their personal banks, defamed by the media, physically threatened & attacked, barred from visiting countries. How much more does censorship have to escalate before you step in? @realDonaldTrump