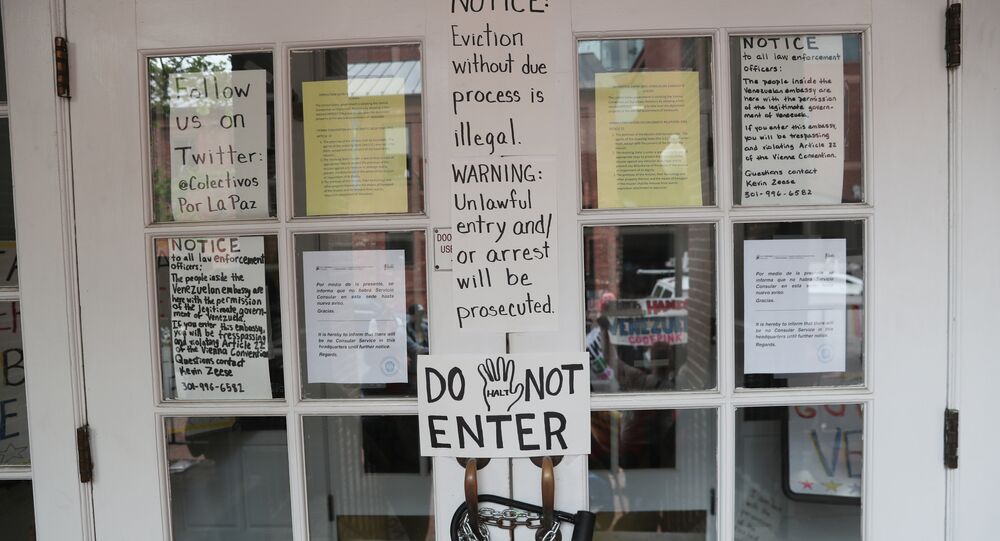 WASHINGTON (Sputnik) - US law enforcement officials blocked off the entrance of the Venezuelan Embassy in Washington on Tuesday amid ongoing protests over the handling of the crisis in the Latin American country, a Sputnik correspondent reported from the embassy.

About 30 policemen with handcuffs arrived at the Venezuelan Embassy, which has been occupied by activists for more than two weeks, blocking the entrance from 30th Street.

The goal of the protesters is to prevent US-backed opposition figure Juan Guaido and his so-called government from taking possession of the building.

© Sputnik
Situation near Venezuelan Embassy in Washington
© Sputnik
Situation near Venezuelan Embassy in Washington
The situation in front of the embassy has been exacerbated amid tensions in the Venezuelan capital Caracas, where Juan Guaido released a video on Tuesday morning with a call on the country's military to join in the final stage of his so-called "Operation Freedom" from the La Carlota military base with the goal of ending the “usurpation of power” by President Maduro.

Maduro's government has slammed Guaido's actions as a coup attempt by a small group of "military traitors" who are seeking to fill "the country with violence". He later said that almost all military leaders remained loyal, despite Guaido's call.

The situation on the streets of Caracas remained largely calm with separate reports of clashes.