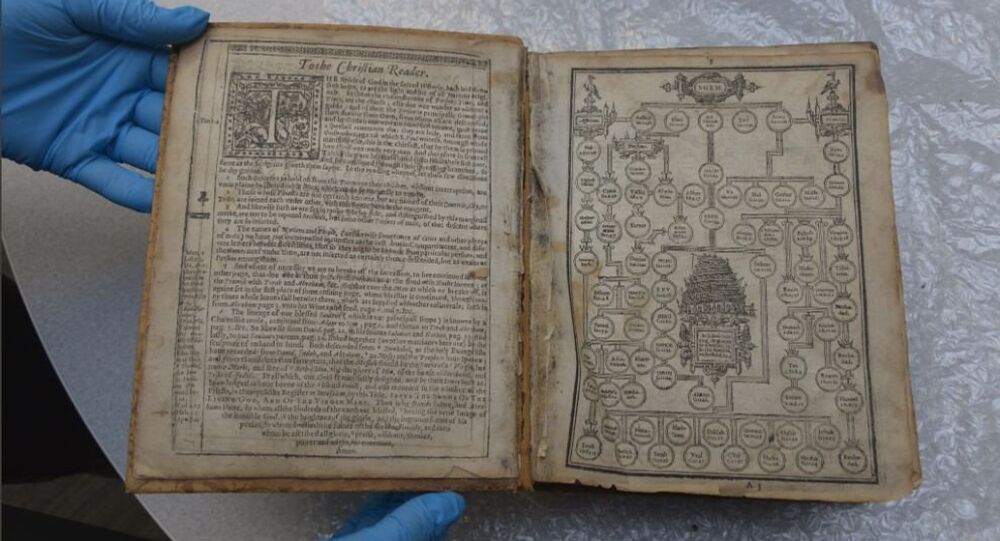 A Geneva Bible dating to 1615 that was stolen from a Pennsylvania library has been found in the Netherlands and returned to the US, authorities announced at a Thursday news conference.

The Bible, which has survived more than four centuries, was one of more than 300 items allegedly stolen from the Carnegie Library of Pittsburgh as part of a 20-year scheme by a former archivist Gregory Priore, 62, and rare books dealer John Schulman, 54, local outlet KDKA reports, both of whom had long worked closely with the library. They have been charged with theft, conspiracy and forgery, among other counts.

Investigators traced the tome to the American Pilgrim Museum in Leiden, which had paid about $1,200 for it. Allegheny County District Attorney Stephen Zappala explained that the director of the Leiden museum realized the Bible it had purchased belonged to the Carnegie Library and reached out to the institution. He's "an honest man," Zappala said, according to KDKA.

"I am happy to say it has finally made its way back to its rightful owner here in Pittsburgh," FBI agent Robert Jones said at the conference, according to the Morning Call. Though there are several extant examples of this particular Bible, he noted, "From a history perspective, it is priceless." The Carnegie Library's Bible is similar to one brought over on the Mayflower with the first English Puritan colonists. The FBI will now hand the book over to local prosecutors, who will return it to the museum, the outlet reports.#FBI Pittsburgh returned a bible stolen from the Carnegie Library in the 1990's to the DA's office today. SAC Jones: “This bible is more than a piece of evidence in a case. It is a priceless artifact of religious significance to people of many faiths." pic.twitter.com/ImPwesHnGP

​More than $8 million worth of rare books, maps, photographs atlases and other printed works were discovered to be missing from the Carnegie Library in 2018. Among the 18 books recovered so far are a copy of Isaac Newton's "Philosophiae Naturalis Principia Mathematica," a profoundly significant scientific work valued at $900,000, and John Adams' "A Defense of the Constitutions of Government of the United States of America," valued at $20,000, Morning Call reports, citing prosecutors.

The Geneva Bible was a translation of the Bible into English by Protestant scholars in exile from England. (It's also called the Breeches Bible, for their decision to say Adam and Eve fashioned "breeches" to cover their nakedness, instead of aprons or loincloths, as are more commonly used.) The Geneva Bible wasn't the first English translation of the scriptures, but it was the first mass produced English Bible to come with study guides, use chapters and numbered verses and provide introductions to books and other assistance to readers. These aides and the Bible's clear language made it immediately popular, and it was an influence on the King James edition that would come a few decades later.

​"Breeches" is not the only sobriquet English Bibles have earned. Historical Bibles with misprints are sought-after items among rare book collectors. There's the Wicked Bible, which accidentally told Christians "thou shalt commit adultery"; the Murderers Bible, of which there are a few versions, one that quotes Jesus as saying "first the children must be killed" (it ought to be "filled"); and the Unrighteous Bible, which tells us "the unrighteous shall inherit the kingdom of God" and several examples of dirty, silly or downright Satanic typos and mistakes.