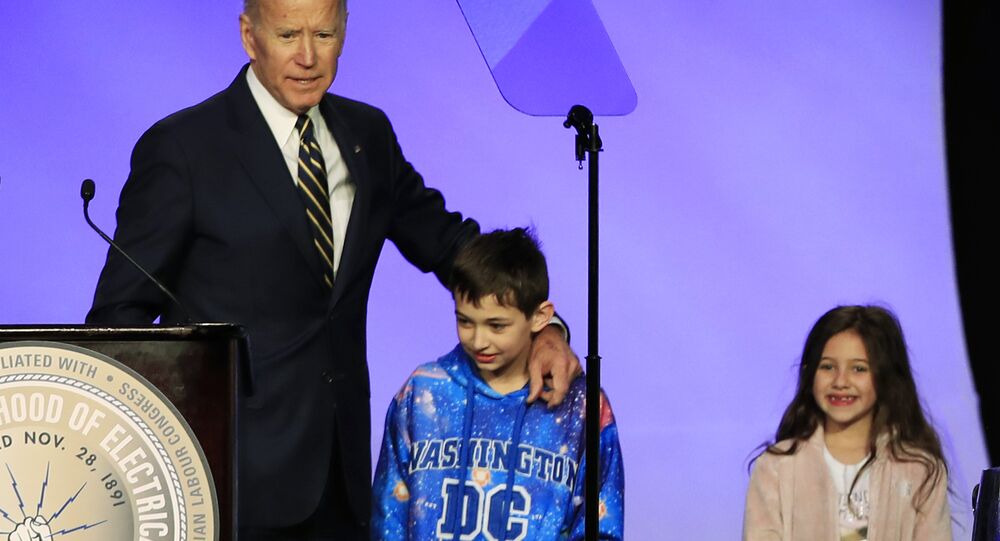 One of the most respected Democrats, former Vice President Joe Biden, officially entered the presidential race this week. The month preceding the anticipated statement was overshadowed by the “boundary controversy”, as some women complained that he had made them feel uncomfortable with his inappropriate touching.

A poll carried out on the campus of the University of Iowa has shown that students are discouraged by Joe Biden’s behaviour, Campus Reform's Media Director Cabot Phillips revealed. The journalist showed young people a video compilation of the presidential candidate and former vice president touching women on several occasions and asked how they felt about it.

The reactions were similar, as the respondents branded his advances “creepy” and criticised his seemingly unwelcome and awkward hugs, shoulder massages, backrubs, and kisses. While some just exclaimed “Oh, gosh”, one reacted by saying “It was really weird”.

A couple of girls could not hold back laughing and saying “ew”, while one man on campus noted that everyone in the video was uncomfortable with how Biden acted.

“That is very wrong and that should not be”, one of the girls on campus responded.

“I think it is a classic example of a man not responding to being around women properly”, another young woman noted.

Some suggested that it will impact his bid for the presidency and could even be a game-changer if it keeps coming back up and does not blow over.

The 76-year-old politician announced on 25 April that he would seek the Democratic Party's nomination for the 2020 presidential election. Ahead of the big announcement, the respected Democrat, who ran for president in 1988 and 2008, became a meme, dubbed “Creepy Joe”.  The controversy was fuelled by complaints made by women about Biden making them uncomfortable and a series of photos and videos of the former vice president appearing to violate the personal space of multiple females and young children.

Throughout the affair, Biden has maintained his innocence, saying he was "not sorry" for "anything" he had ever done, and explained his behaviour by saying that "the times have changed" and that personal space norms were different when he was growing up.

Nevertheless, the scandal has given rise to a never-ending series of photoshopped images and ironic tweets. Even US President Donald Trump has joined the roasting party. He posted a mocking video of Biden on Thursday, poking fun at his explanation of the inappropriate behaviour allegations.

Biden Enters Democratic Presidential Race: Will the Third Time Be the Charm?