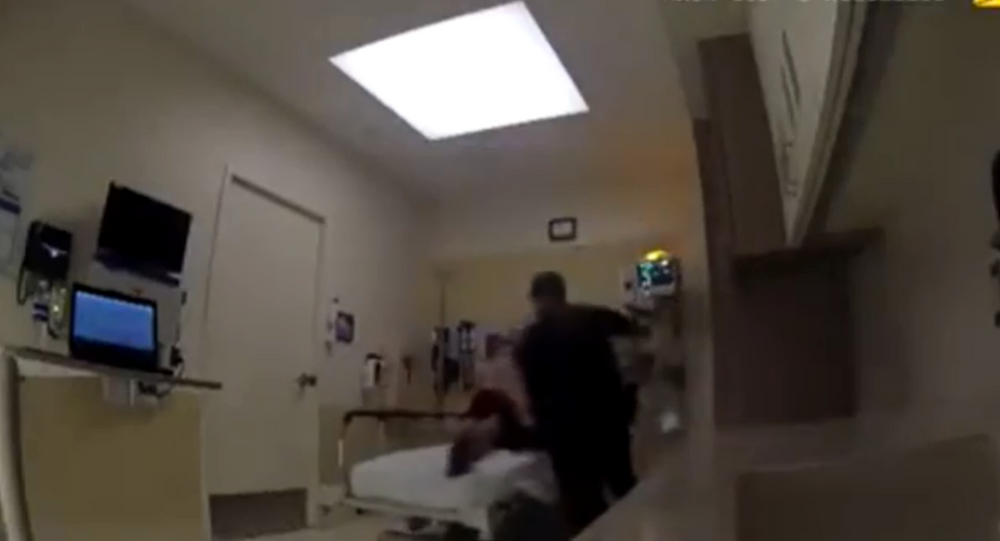 A deputy with Florida's Broward County Sheriff's Office recently became the subject of an internal investigation after body camera video showing him striking a suspect who was handcuffed to a hospital bed surfaced.

The incident took place in January at the Broward Health North hospital in Deerfield Beach. Arrestee David O'Connell was initially taken into custody by Deputy Jorge Sobrino at a Pompano Beach Walmart for reportedly charging an employee and attempting to strike them, according to the Sun-Sentinel.

Sobrino tackled O'Connell during the arrest, before punching him in the face multiple times in order to "gain compliance." Sobrino eventually transported O'Connell to the Broward medical center so that the detained man's facial injuries could be examined.

Video of O'Connell's stay at the center shows him with his right hand handcuffed to a hospital bed as Sobrino stands off to the side of the room. Kneeling on the bed, O'Connell curses at Sobrino and shouts at nearby medical staff, requesting that he be discharged.

Fed up, Sobrino shuts the room door and orders O'Connell to quiet down.

​But things escalate even further when O'Connell ignores Sobrino and opts to sit down on the bed with his legs hanging from the side. His commands ignored, the 24-year-old deputy responds by flinging O'Connell's legs on top of the bed and punching him in the face.

After Sobrino places O'Connell in an arm lock, his left hand is cuffed to the hospital bed's side rail. The video ends with a second officer entering the room as the pair argue.

Local media indicate that Sobrino wrote in his arrest report that he struck O'Connell while O'Connell was restrained because he'd been pushed by the arrestee, which led to O'Connell being charged with battery on a law enforcement officer, a felony.

"Deputy Sobrino punched Mr. O'Connell in the face without physical provocation because he was frustrated with Mr. O'Connell. Punching a restrained individual who is not physically aggressive is unacceptable."

That letter, which was sent to the Broward Sheriff's Office, ultimately prompted the department to initiate an internal affairs investigation into the confrontation. That investigation is ongoing.

Although the felony battery charge against O'Connell was dropped by prosecutors, the resisting arrest charge that resulted from the Walmart interaction remained, NBC Miami reported. He pleaded no contest to the charge, and was sentenced to adjudication withheld and court costs.

Sobrino is still on active duty.