This is a highly unusual incident which could lead to an escalation of violence, officials say.

A US Customs and Border Protection video obtained by the US media shows a group of heavily armed men escorting a migrant woman and her eight-year-old son across the US southern border.

A group of at least five smugglers in tactical gear armed with what appears to be AK assault rifles are seen coming to the border in a truck, along with the mother and her kid. The men escort the migrants to the US border and then turn back.

The video was taken Saturday evening near the town of Lukeville, Arizona, according to Fox News.

Roughly a dozen US Border Patrol agents responded to the incursion, and the woman and child turned themselves in to the agents, the report says.

© AP Photo / Charlie Riedel
Mexico to Present US With Report on Economic Losses Due to Border Delays
Commenting on the incident, Border Patrol agents said it was a highly unusual event and expressed their concern that this tactic might soon become widespread, possibly leading to violence.

"This is highly unusual and highly concerning to the agency," a border official said in an interview for Fox. "These armed individuals along the border represent an escalation of tactics. This is not mom and dad and kids deciding to head to the border. This is a no kidding, orchestrated effort to bring individuals to the US. It is not just the numbers. It's who is running this enterprise."

The area where the incident took place is identical to another part of the border, where some 399 Guatemalan immigrants — who arrived in several buses right next to the border — were apprehended last week: the border there featured only a vehicle barrier, which poses no obstruction to pedestrians. 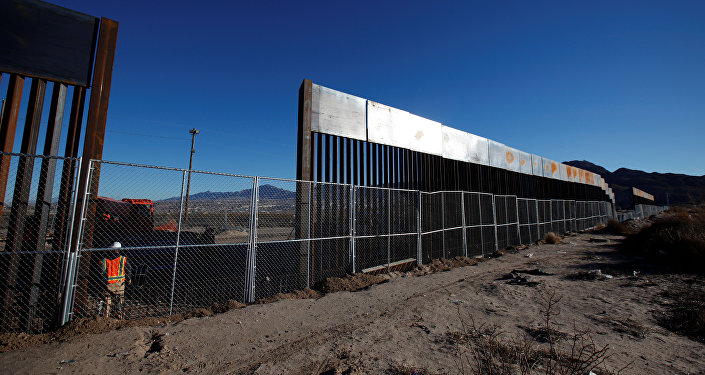 © REUTERS / Jose Luis Gonzalez
Mexico Loses Over $1.5Mln Daily in One Border City Alone Due to Migrant Flow - Lawmaker
However, smuggling individual migrants under cover of darkness is a stark contrast to the bold, en masse incursions Border Patrol agents have dealt with recently, after the migrants realized the agents have no capability to keep everyone in detention facilities and have no other choice but to release migrants to the community while they await hearings in immigration courts.

Border Patrol officials have repeatedly called on the US Congress to allow the construction of a physical barrier that would repel pedestrian immigrants. However, the Democrats have fiercely opposed the wall plan, which is spearheaded by US President Donald Trump himself. Their opposition has forced Trump to announce a national emergency in order to overcome Congress' reluctance and divert billions of dollars in Pentagon funds towards the wall's construction.

'That’s Why We’re Here': Central American Migrants Say Media Lured Them to US