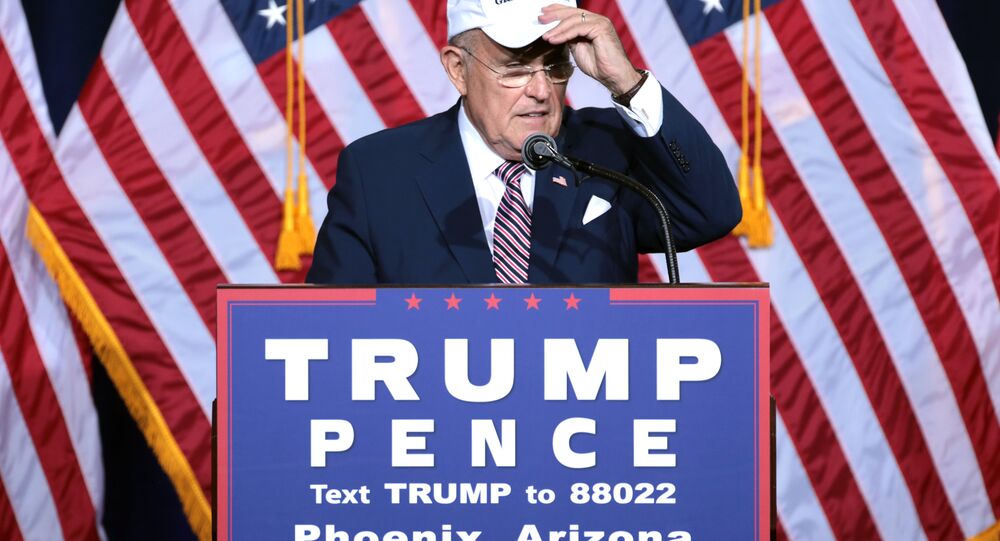 Late last week, the Justice Department released the long-awaited Mueller report investigating possible collusion between the Trump campaign and the Kremlin during the 2016 race, concluding that it could "not establish" that the president or anyone in his campaign had actually "conspired or coordinated" with Russia.

"There's nothing wrong with taking information from Russians", Giuliani said, speaking to CNN, responding to ex-Massachusetts Governor Mitt Romney's recent allegation that Trump had "welcomed help from Russia – including information that had been illegally obtained", during the 2016 race.

"Stop the bull. Stop this pious act that you weren't trying to dig up dirt on people, putting dirt on people", Giuliani said, referring to Romney.

"The information that was gleaned and disseminated – every newspaper printed it. Why did the Washington Post print the information that came from a foreign source, when they knew it was hacked? Aren't they just as wrong for doing that as the campaign wanting to use it?" Trump's attorney asked.

Morality Not in the Criminal Code

© REUTERS / Larry Downing
Mueller Relied on Untested Intel to Justify Russia Allegations - Ex-FBI Counsel
Giuliani emphasised that legally speaking, the "dirt" on the Clinton campaign released during the race was not a campaign contribution, with the recently released Mueller report making that clear.

WikiLeaks, the whistleblowing resource which released the Democratic National Committee's hacked emails in 2016, has consistently denied Russian involvement in the email dump, with founder Julian Assange telling US media in late 2016 that while he could not reveal the leak's source, "it wasn't a state party".

But Giuliani's comments, made in wake of the release of the Mueller report, which cleared the Trump campaign of colluding with Russia, reignited anti-Trump sentiment online, with Twitter users urging Congress to "impeach" and accusing Trump, Giuliani, and the Republicans of being "traitors" coordinating with Russia, America's "existential enemy".

Giuliani just told the country “there’s nothing wrong” with taking things from the Russians to win an election. This should settle it, @TeamPelosi and @RepJerryNadler. This cannot be the precedent. This is well beyond dangerous. IMPEACH.

Yes, Rudy Giuliani, there is something wrong with "taking information from Russians" or letting any foreign power interfere in American elections. And with Republicans in charge, we're no better protected for 2020 than we were 4 years ago. #VoteThemOut https://t.co/GtBBF0aGkl

While Donald Trump keeps repeating “no collusion” like Rain Man with a Twitter account, Rudy Giuliani rises on Easter to say yeah we took info from Russians and there’s nothing wrong with it. What a dumbass. No need to have Mueller testify, just put Rudy’s big mouth on the stand.

Either @RudyGiuliani is working hard to take trump down, or he graduated from Trump University School of Law. That is the only thing I can come up with.

Only a traitor would say there is nothing wrong with taking info from Russians.

Giuliani just said there is nothing wrong with taking info from Russians.

Like I said, only a traitor would say that.

The Russians are our existential enemy, Dude! There’s everything wrong, including the people who engaged with the Russians. https://t.co/PqFHn5hQEH

Trump's supporters countered, recalling that the discredited "Steele dossier" was actually created by a foreign agent, or pointed to the long (and proven) record of US meddling in foreign countries.

Who offered the “Pee Dossier”? OHHH WAIT! A foreign agent!

I’ve lambasted Rudy Giuliani for years as a deranged maniac, which he fundamentally is, but that he demonstrates better command of the facts and evidence here than Jake Tapper is a testament to just how far the media has sunk https://t.co/bGjjOPpzeA

Hillary took information from Russians & even paid them to manufacture the Trump Russia collusion hoax. You are fine with that & knowingly shilled that lie for 2+ years hoping Mueller would find something to make it true. You must be devastated. My condolences. 🤣🤣🤣

No doubt. So who from the US do we prosecute for interference in Iran, Iraq, Syria, Honduras, Venezuela, Israel, Columbia….

Clearly, it's illegal and whichever American interfered in these elections must pay. We can start with the CIA chiefs and go from there.

© AFP 2020 / Mladen Antonov
Russian Embassy Calls on US to Engage in Mending Ties in Wake of Mueller Report Release
On 18 April, the Department of Justice released a redacted version of special prosecutor Robert Mueller's two volume report on alleged Russian meddling in the 2016 US presidential election and alleged collusion between the Trump campaign and the Kremlin. The report concluded that the Trump campaign had not "conspired or coordinated" with Russia, but claimed that Russia did meddle in the election via a social media campaign and "cyber intrusions (hacking)" to uncover and release "materials damaging to the Clinton Campaign".

Russia has consistently denied claims that it meddled in the US presidential election, with President Putin calling the allegations "utterly ridiculous" and Foreign Minister Sergei Lavrov saying that they have not been backed up by any substantive evidence at any stage.

Twitter Slams Dem. Warren as She Urges to Impeach Trump Over Mueller Report

Mueller Report Reveals Trump's Lies And Deception, But Not Collusion