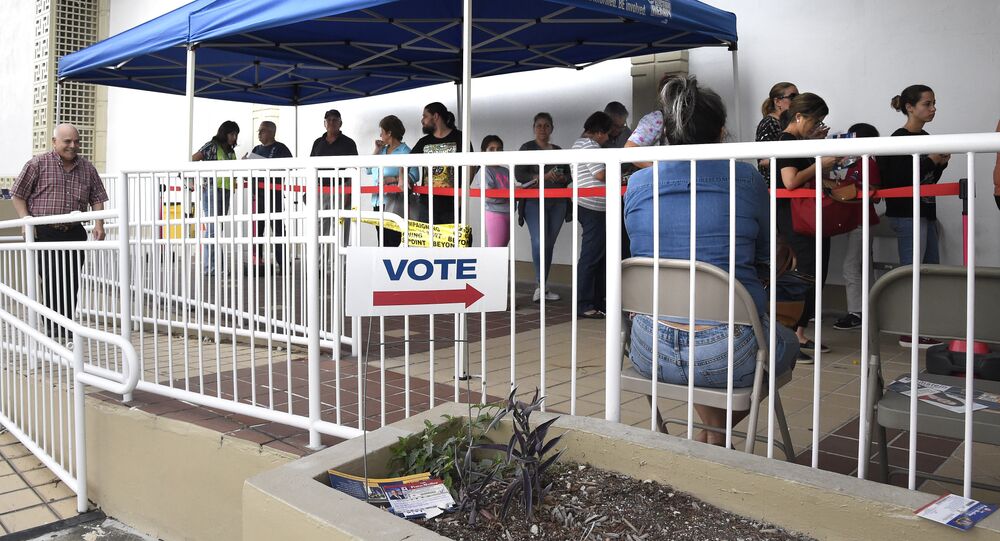 In what has to be the shortest-yet transit of the Russiagate lies-to-refutation pipeline, the Miami Herald provided extensive evidence in a Thursday article disproving its own outlandish misreading of the Mueller report’s conclusions about supposed Russian hacking of Florida’s election system in 2016.

We appreciate it when people do our work for us. For the sake of both brevity and edification, here's what the Herald argued on Thursday.

© AP Photo / Dmitri Lovetsky
'Not Going to Let This Go': US Democrats Got 'Major Political Utility' From Russiagate

According to special counsel Robert Mueller's report on the two-year-long Russiagate investigation, "In August 2016, GRU [Russian military intelligence] officers targeted employees of [REDACTED], a voting technology company that developed software used by numerous US counties to manage voter rolls, and installed malware on the company network… the spearphishing emails contained an attached Word document coded with malicious software (commonly referred to as a Trojan) that permitted the GRU to access the infected computer."

The Herald reported that "over 120 email accounts used by Florida county officials responsible for overseeing the 2016 election" received the emails.

"We understand the FBI believes that this operation enabled the GRU to gain access to the network of at least one Florida county government," the report said and the Herald reported — noting, however, that Mueller's office "did not independently verify that belief."

Local officials didn't know what they were talking about, either.

"It is not information that I am aware of," Paul Lux, president of the Florida State Association of Supervisors of Elections, told the Herald Thursday. "To my knowledge, no counties were compromised. So, my presumption is that.[sic] I don't know which county would have been compromised, and that's nothing I've ever heard of."

Further, Florida's Department of State told the paper "it has no knowledge of any successful hacking attempt during the 2016 election," as the Herald put it.

"Upon learning of the new information released in the Mueller report, the Department immediately reached out to the FBI to inquire which county may have been accessed, and they declined to share this information with us," Florida DoS spokesperson Sarah Revell told the paper. "The Department maintains that the 2016 elections in Florida were not hacked. The Florida Voter Registration System was and remains secure, and official results or vote tallies were not changed."

The Herald goes on to note that former US Sen. Bill Nelson and former Florida Governor Rick Scott sparred over the question of Nelson claiming last year that Russian operatives had "penetrated" an unnamed county voter registration database in Florida. However, Scott also noted that "the Florida Department of State had no information to corroborate Nelson's claims and the FBI and Department of Homeland Security did not provide any information to support the claim."

Mueller's report offers no further clarification of the issue. A US government official familiar with the matter said "that characterization by Nelson overstated the GRU threat to Florida's election systems," the Herald wrote.

We might need to see a doctor for that whiplash! In the interest of warming over a Russiagate story long put to bed, the Miami Herald ignored the extensive evidence presented in its own story disproving the story's basic premise: that ostensible "Russian hackers" both tried and succeeded at entering and disrupting Florida's election system.

Way back in September 2017, Sputnik reported that after DHS announced that 21 US states' election systems had been targeted by "Russian government hackers," the governments of several of those states came out publicly against the report.

"My office was notified by the US Department of Homeland Security that Russian cyber actors ‘scanned' California's internet-facing systems in 2016, including Secretary of State websites… Following our request for further information, it became clear that DHS' conclusions were wrong," Alex Padilla, secretary of state of California, said in a statement at the time.

"Either they were right on Friday and this is a cover up, or they were wrong on Friday and we deserve an apology," Mark Thomsen, chairman of the Wisconsin Election Commission, also said, Sputnik reported.

The sheer deluge of DHS claims caused The Intercept's Glenn Greenwald to lament that while "sometimes stories end up debunked… this is no isolated incident," adding that "the examples of such debacles when it comes to claims about Russia are too numerous to comprehensively chronicle."

That whole process, from claim to refutation of the DHS's meritless hacking scare story, took about two to three days, with DHS making its claims on September 22, 2017, and the state governments' statements following on the 26th and 27th.

But that was hardly the first time a sensational news story about Russian hacking went to press without being checked out for inconsistencies first. A December 31, 2016, article in the Washington Post famously failed to check with Vermont's Burlington Electric company before writing that Russian hackers had attacked the state's electrical grid. The Post finally issued a retraction on January 2, 2017, three days later, although it didn't take down its original story.

With that in mind, we can only conclude that the US mainstream media has significantly upped its game: now it disproves its own stories within their own text. Much more convenient for readers interested in the truth, after all.

How RussiaGate Has Led the US Down a Dangerous Path

Russiagate: The Hoax That Keeps On Giving