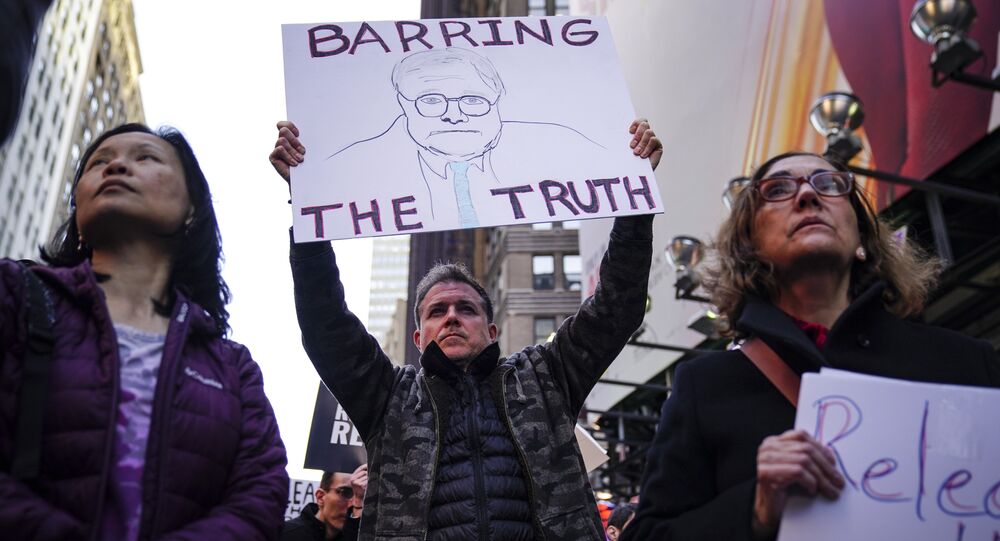 Mueller’s probe, whose report was released in its entirety on 18 April, has failed to discover any evidence of collusion between Trump’s campaign and Russia, though some of the US president’s critics appear unconvinced by these findings.

The unveiling of Special Counsel Robert Mueller’s 448-page report which, as US Attorney General William Barr stressed, did not find any evidence of Trump’s campaign staff colluding with Moscow or evidence of Trump trying to obstruct justice, apparently was not enough to sway the opinion of the current US president’s celebrity detractors, many of whom took to social media to vent their grievances.

Famous Trump critics, like actresses Alyssa Milano and Rosie O’Donnell, appeared outraged by Barr’s summary of the report, which the attorney general provided before the whole document was released to the public.

Do you know what the #MuellerReport doesn’t change? Everything.

Trump still wants to take away your healthcare.

Trump is still siding with billionaires over the American people.

Trump still doesn’t care about you and what Americans need to live a life of health & prosperity.

Thank you Barr for admitting that Russia attacked the USA in an act of Cyberwarfare. Even though you left out hacking and attempting to hack into our voter rolls. And the US has done nothing!!

​Their sentiment was, perhaps predictably, met with derision and mockery by many social media users who appeared to take great delight in the celebrities’ reaction.

Just give it up already! #HillaryLost and there was #Nocollusion

​The US Department of Justice (DOJ) has released Special Counsel Robert Mueller's "Report On The Investigation Into Russian Interference In the 2016 Presidential Election", publishing the massive 448-page report on the justice.gov website.

© AP Photo / Andrew Harnik
US Attorney General Barr Says Trump is CLEARED, NO COLLUSION With Russia
Ahead of the release, Attorney General Barr indicated that Mueller did not find any evidence that any US citizen was conspiring with Moscow, or that Trump tried to obstruct the Russia probe in any way.

The report was redacted prior to its release, with Barr pointing out that most of the redactions were related to preventing harm to ongoing legal matters, with none made due to executive privilege.

However, the US House Judiciary Committee on Friday issued a subpoena to the Department of Justice for the entire unredacted report.