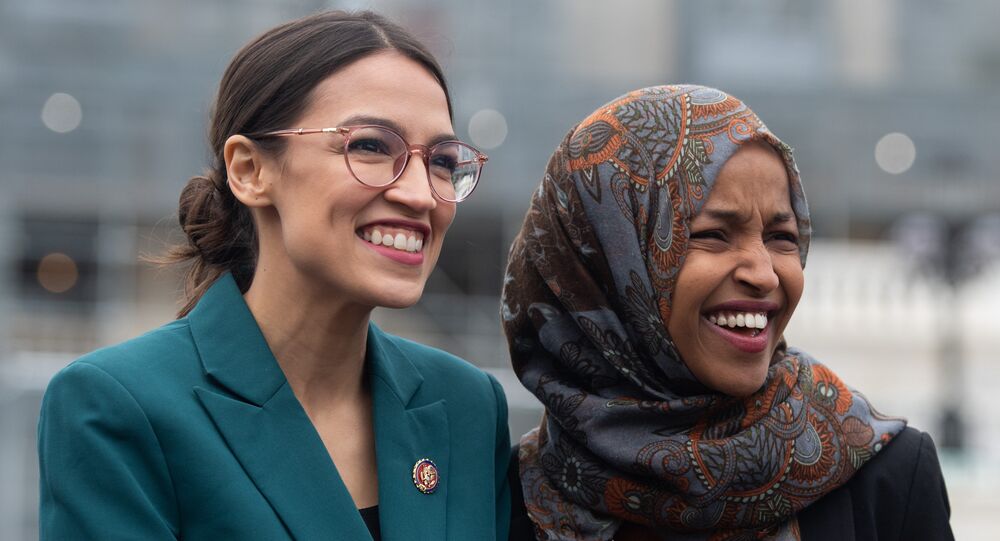 Democratic Rep. Ilhan Omar, one of the first two Muslim women to ever sit in Congress, has been embroiled in a number of controversies, with the most recent being sparked by her obscure description of the deadliest terror attack on US soil on 11 September 2001.

New York Congresswoman Alexandria Ocasio-Cortez, commonly referred to as AOC, took to Twitter to defend fellow freshman Rep. Ilhan Omar (D-MN) after The New York Post ripped the Muslim lawmaker for describing the 9/11 terror attacks as “some people did something” in a March speech.

AOC blasted the NY Post’s Thursday issue, with the headline “Here’s your something”, along with a photo of the World Trade Centre bursting into flames after an al-Qaeda-hijacked plane hit it.

In a fiery tweet, Ocasio-Cortez claimed that Omar has done more for 9/11 families than the Republicans and slammed the media outlet for “weaponising her faith”.

Here’s 1 fact: @IlhanMN is a cosponsor of the 9/11 Victim Compensation Fund. She‘s done more for 9/11 families than the GOP who won’t even support healthcare for 1st responders- yet are happy to weaponize her faith.

AOC’s response to the wave of criticism directed at Omar did not impress social media users, who continued bashing both Omar and Ocasio-Cortez:

It's disgusting that anyone would engage in apologetics for someone who described 9/11 that dismissively. Even a literal enemy propagandist would have the sense not to do so--but Rep. Omar has proven herself "special" in terms of cluelessness of that kind and will continue to.

"Some People Did Something"…. forget about faith, race, color, gender, etc. If you lost a family member to a crime and the defense lawyer said "Well, someone just did something" referencing your family member's murder, you'd be OK with it? Really?

She got caught plain and simple…..

Horrifying, hateful cover? Like it's a doctored photo? You are truly a twit. What happened on 9/11 WAS horrifying and WAS a hateful act. You and your two "sisters" in Congress are what's truly vile and hateful. Can't wait until all 3 of you are voted out.

What is wrong with both of you? You should both be ashamed….the post is 100% correct….it wasn't some people that did something…it was some straight up animals that killed humans….a terrorist sympathizer and a moron…. dangerous combo

Omar delivered her controversial speech at a Council on American-Islamic Relations (CAIR) event in Los Angeles:

“CAIR was founded after 9/11, because they recognise that some people did something, and then all of us were starting to lose access to our civil liberties”, the Somali-born lawmaker said.

In the same message, she called on US Muslims to “raise hell” and “make people uncomfortable” in the face of discrimination.