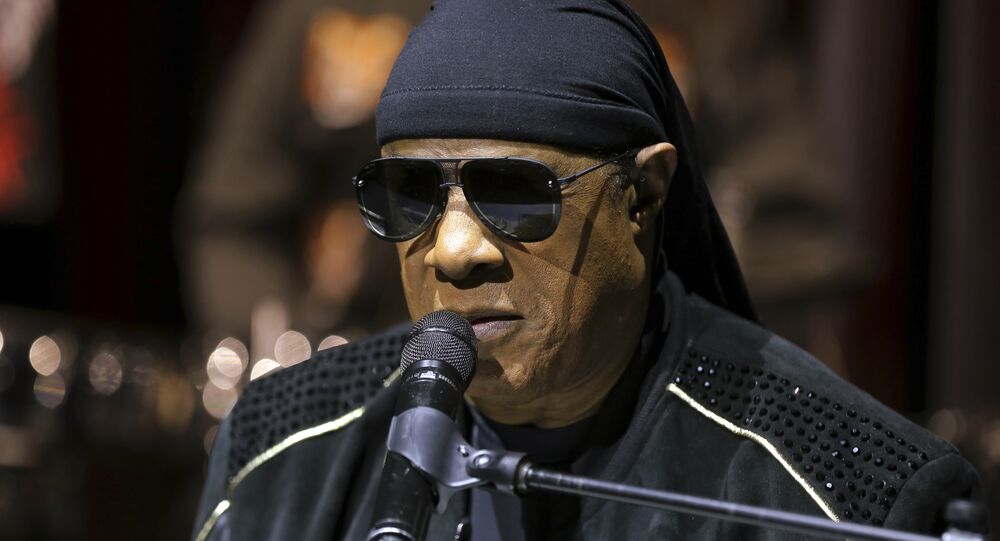 Stevie Wonder and Snoop Dogg were among those paying tribute to the late rapper during his funeral ceremony in Los Angeles Thursday.

"It is so painful to know that we don't have enough people taking a position that says: listen, we should have stronger gun laws," Wonder said at the memorial Thursday. "It's unacceptable. It's almost like the world is becoming blind."

Wonder himself has been blind since shortly after his birth. Despite his disability, he is one of the most critically and commercially successful musical performers of the late 20th century: he has received 25 Grammy Awards and sold more than 100 million records worldwide.

"I pray that people grow. I pray that the people who have a responsibility to perpetuate life will do it by making sure that the laws will make it so very hard for people to have guns," he said at the memorial, according to The Hill.

​Rapper Ermias Joseph Asghedom, known as Nipsey Hussle, 33, was shot dead outside his Marathon Clothing store in Los Angeles on 31 March. Police are investigating whether the shooting is connected to a planned meeting between Hussle, Roc Nation entertainment company representatives and Los Angeles police over gang violence prevention measures, according to NBC News. The rapper was murdered one day before the meeting was scheduled to take place.

👼🏼 NIPSEY HUSSLE 👼🏼
just watched the whole ceremony 💙🔒
This was absolutely perfect so much love for this family and as @LaurenLondon said THE MARATHON CONTINUES 😘😘😘😘😘😘 pic.twitter.com/GpbQ7NDMaL

​Eric Holder Jr., 29, was arrested on 2 April as a suspect in the shooting. On 4 April, he pleaded not guilty to charges of murder, attempted murder and possession of a firearm by a felon, reported the New York Times.

Rapper Master P visited South Central Los Angeles to pay homage to the life and work of #NipseyHussle at memorial outside the late rapper and community builder's store, The Marathon, and in the parking lot of strip mall Nip co-owned. Photos: Haroon Rajaee/@TheFinalCall pic.twitter.com/WUEA3Uc1Wi

​Numerous celebrities and lawmakers have expressed condolences over Hussle's death and praised his community activism. Los Angeles authorities have announced their intention to rename the intersection of Slauson Avenue and Crenshaw Boulevard near Hussle's store to Nipsey Hussle Square to honour his contributions to society, according to the Los Angeles Times.

The funeral ceremony was also attended by famous rapper Snoop Dogg, who announced that former US President Barack Obama had sent a letter to the ceremony, saying Hussle "set an example for young people to follow and is a legacy worthy to follow."