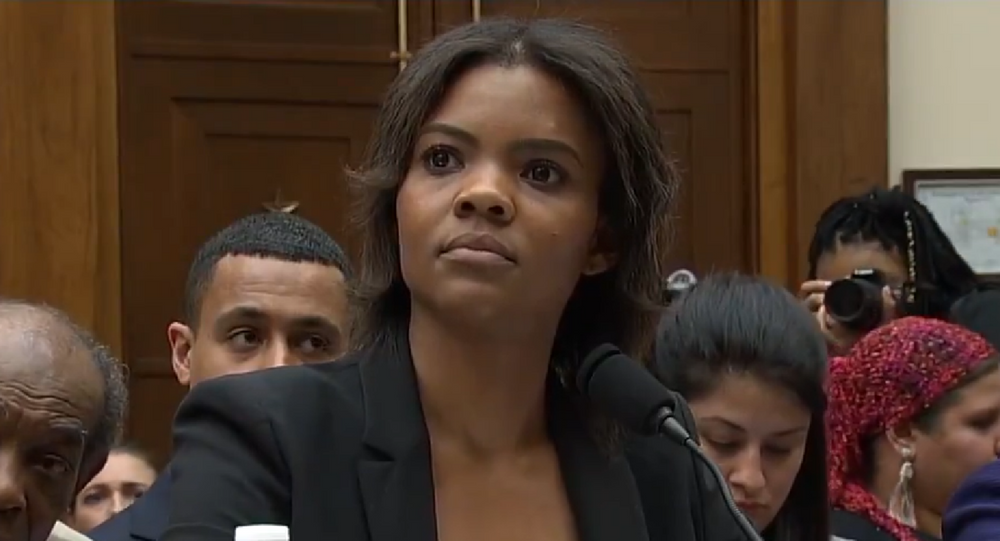 "In congressional hearings, the minority party gets to select its own witnesses," Lieu said during the hearing, which was organized to "examine hate crimes, the impact white nationalist groups have on American communities and the spread of white identity ideology." Owens was testifying before the House Judiciary Committee during Tuesday's hearing.

"And of all the people the Republicans could have selected, they pick Candace Owens. I don't know Ms. Owens. I'm not going to characterize her. I'm going to let her own words do the talking. I'm going to play for you the first 30 seconds of a statement she made about Adolf Hitler," Lieu said, before holding his cell phone to his microphone and playing a clip of Owens from an event in London last year, in which she responds to a question about the trajectory of nationalist movements.

​Owens, however, wasn't focused on Hitler in the clip. She was addressing nationalism, and how it's been poisoned by its association with Hitler — which one would think by definition means she's calling Hitler poisonous. The panel she was part of had been asked a question about "nationalism and globalism," how the terms are "weaponized within the media" and the long term health of both movements.

Owens' initial response to that question is what Lieu uses in his clip. "I actually don't have any problems at all with the word nationalism," she says. "I think that the definition gets poisoned by elitists that actually want globalism. Globalism is what I don't want. Whenever we say 'nationalism,' the first thing people think about, at least in America, is Hitler. You know, he was a national socialist. But if Hitler just wanted to make Germany great and have things run well, OK, fine. Problem is, he had dreams outside of Germany, he wanted to globalize, he wanted everybody to be German, everybody to be speaking German."

​Lieu asked immediately after playing the clip if attempts to "legitimize" Hitler contributed to white nationalism.

But Owens' remarks were never intended to "legitimize Hitler" but to offer an example of, as she described it, how the term "nationalism" is misunderstood, poisoned and weaponized.

Hitler was "a homicidal, psychotic maniac" and there is "no excuse or defense ever for… everything that he did," Owens said in February, following controversy over her comments, USA Today reported. She also noted that her comments were intended to explain that Hitler was not a nationalist who was putting German people first. Rather, he was "putting German Jews into concentration camps and murdering — he was a mass murderer."

When given the opportunity to respond to Lieu playing the clip Tuesday, Owens said, "It's pretty apparent that Mr. Lieu believes that black people are stupid and will not pursue the full clip in its entirety… He purposely presented an extracted clip," referring to the fact that Lieu had chosen to play only a select portion of her remarks. However, before she could continue, Chairman Jerrold Nadler (D-NY) banged his gavel and reprimanded Owens for calling Lieu "stupid," which she didn't.

​"The witness may not refer to a member of the committee as stupid," Nadler said, to which Owens responded, "I didn't refer to him as stupid. That's not what I said," before continuing with her response.

"He's trying to present as if I was launching a defense of Hitler in Germany," she added. "I do not believe that we should be characterizing Hitler as a nationalist. He was a homicidal, psychopathic maniac that killed his own people. A nationalist would not kill their own people," she said, before adding that the clip Lieu played is "unbelievably dishonest," and that she was "deeply offended by the insinuation of revealing that clip without the question that was asked of me."

Lieu has in the past made several comments in an attempt to add fuel to Russiagate, though two years' worth of investigation have amounted to no evidence of collusion between Trump campaign officials and Russia before the 2016 US presidential election.

​"Our 11 year old just asked me if President Trump was part Russian. That would be really funny if it wasn't so really scary," Lieu tweeted in May 2017, suggesting that Russian heritage would be something to fear about a president. In addition, he blamed Trump's supposed guilty conscience as the primary impetus for his firing of then-FBI Director James Comey without warning in 2017.