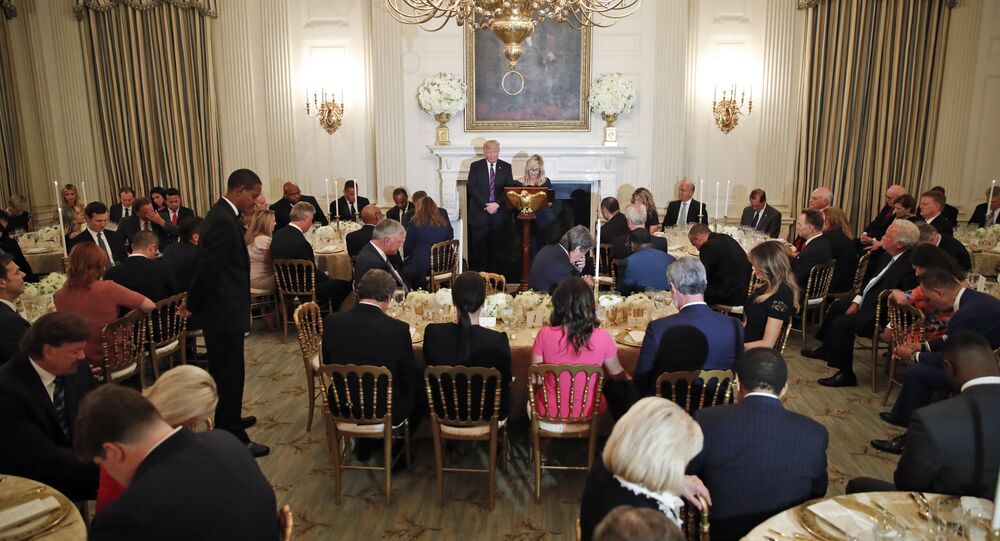 Pete Buttigieg, mayor of the city of South Bend in the state of Indiana, who's a gay Episcopalian Christian who seeks the Democratic Party’s nomination for the 2020 US presidential election, has delivered a verbal broadside against Evangelical Christians who support President Donald Trump, labelling their actions as “hypocrisy”.

© REUTERS / Abir Sultan
‘The Lord Is at Work’: How Top US Diplomat’s Religion Shapes US Foreign Policy
During his recent appearance on NBC’s "Meet the Press", Buttigieg described the president as "somebody who not only acts in a way that is not consistent with anything that I hear in Scripture or in church…but also personally how you're supposed to conduct yourself".

"Even on the version of Christianity that you hear from the religious right, which is about sexual ethics, I can't believe that somebody who was caught writing hush-money checks to adult-film actresses is somebody they should be lifting up as the kind of person you want to be leading this nation", he lamented, referring to the allegations brought against Trump by adult film actress Stormy Daniels.

Buttigieg also previously criticised Vice President Mike Pence on several occasions, calling him a "cheerleader of the porn-star presidency" during a CNN town hall in March, and wondering whether Pence "stopped believing in Scripture when he started believing in Donald Trump".

I find it completely believable. Evangelicals are awful human beings.

Kisses for the next President!! #MayorPete2020 🏳️‍🌈You and your husband are a giant breath of fresh air for a nation choking on corruption and chaos and greed. My gut instinct tells me you are the one. Thank you for giving America hope and dignity and intelligence. I LOVE YOU!!👨‍❤️‍👨 pic.twitter.com/HG6ktNIrDi

​Others, however, appeared less inclined to agree with Buttigieg’s views or his stance on Evangelical Christians.

A baby killing sodomite is lecturing Americans on religion.

The end has got to be near.👎🏽 pic.twitter.com/HmDgFzohcy

There are times when I think Peter Buttgieg could get the Democratic nomination by being able to relate more to voters in early states than the Myriad coastal/northeastern senators & elites in or looking at the race. Then, he says stuff like this, and I just don't know.

Lol so, is this how he hopes to get the evangelical vote, by calling them hypocrites!p? 😂😂😂 genius strategy there.