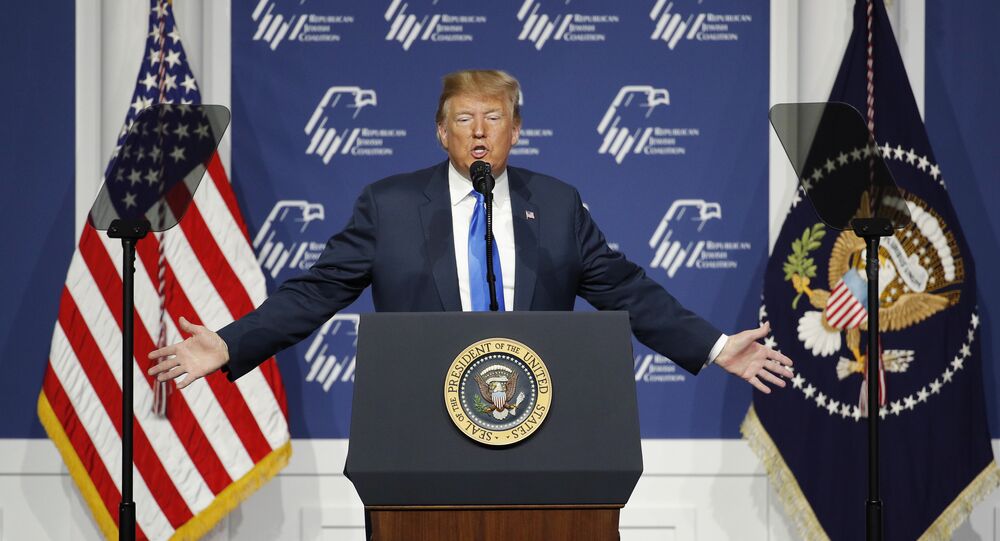 President Trump said Saturday that Democrats have allowed anti-Semitism to “take root in their party and their country,” slamming Rep. Ilhan Omar’s comments on Israel.

“They’ve become the party of high taxes, open borders, late-term abortion, crime, witch hunts and delusions, and now the Democrats have even allowed the terrible scourge of anti-Semitism to take root in their party and in their country,” the US President said in a speech before the Republican Jewish Coalition in Las Vegas.

He noted that in January, Democrats blocked legislation to confront the Boycott, Divest, Sanctions (BDS) movement against Israel over its treatment of Palestinians, citing the government shutdown as the reason for the move.

Trump said that "people aren't fighting for Israel in Congress," warning that "if implemented, the Democrats' radical agenda would destroy our economy, cripple our country and very well could leave Israel out there all by yourselves — can't do that."

He also “thanked” Ilhan Omar who came under fire after saying that supporters of Israel were pushing for US politicians to declare "allegiance" to that nation and suggesting that some members of Congress were being paid by the American Israel Public Affairs Committee (AIPAC) to support Israel back in February.

© REUTERS / Francois Lenoir
Trump Demands Belgium Should Explain Giving Out Humanitarian Visas to 1,500 Syrians - Reports
Additionally, he commented on the escalating migration crisis on the southern border, claiming that some of the migrants seeking asylum are “the roughest people you’ve ever seen.”

“People that look like they should be fighting for the UFC,” he told the audience.

He called the whole asylum-seeking system a “scam” and questioned the motivation of those deciding to flee to the US. At one point the US President mimicked a migrant reading from a lawyer-written script to claim asylum.

“‘I am very fearful for my life, I am very worried that I will be accosted if I am sent… home,’” Trump said, pretending to squint to read a script, before telling the crowd: “No, no he’ll do the accosting. We don't love the fact that he's got tattoos on his face, that's not a good sign. We don't love the fact that he's carrying the flag of Honduras or Guatemala or El Salvador, only to say he's petrified to be in his country.”

Trump also repeated the same remark he made on Friday, saying that "our country's full."