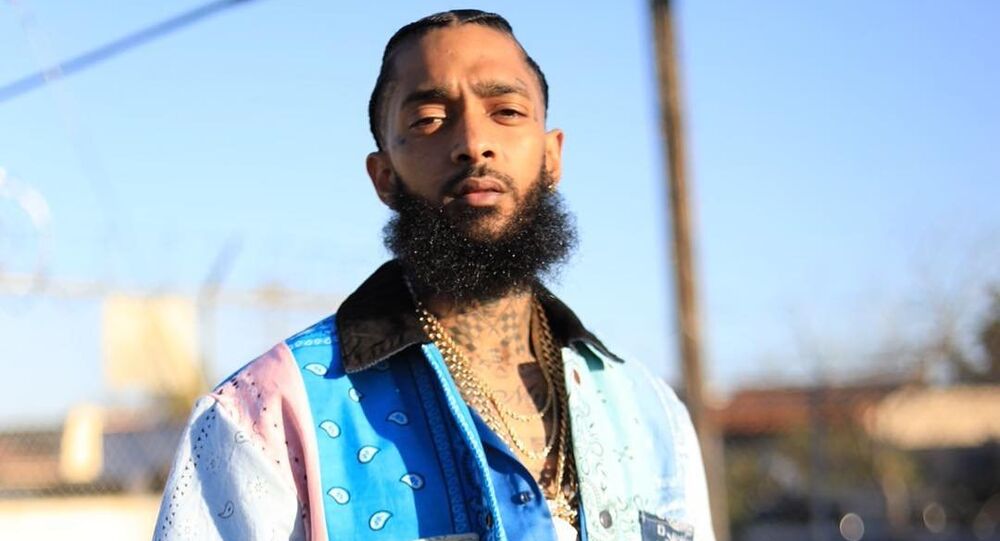 The shooting death of rapper Nipsey Hussle has sent shockwaves through his LA community: he made improving South Los Angeles a priority, including ending gang violence.

Gangs from across Los Angeles declared a truce and came together to pay tribute to the slain rapper and community activist Nipsey Hussle in his neighbourhood of Crenshaw, TMZ reported.

The rally, which began in Crenshaw and moved toward the rapper’s The Marathon Clothing store, not far from where he was shot dead earlier this week, was reportedly held after gang leaders from Watts, Compton, LA, and Inglewood met up to discuss a ceasefire – the first of its sort since 1992.

In an Instagram video posted by Big Boy, a Los Angeles radio and morning show host, participants of the march can be seen walking down West Slauson Avenue and arriving at the site of Nipsey’s store.

This is AMAZING!!!!!!!!!! Some of y’all may not know or understand what this means. This is POWERFUL. This doesn’t happen everyday in L.A. There’s A LOT of history here. A LOT of reasons for this to not happen. However, this is what Nipsey meant to us. This is US coming together. Nipsey IS LOVED and RESPECTED. This is HUGE. God bless these Brothers and Sisters from these different hoods for coming together in honor of #NipseyHussle. We MISS you, Nayborhood Nip. The Marathon Continues 🏁🏁 “Peace Treaty” @westcoastkam

"@NipseyHussle Look what you started 60’s,HOOVAS, ETG’s, FTG, VNG, BOUNTY HUNTERS, MONA PARKS, BRIMS, PIRUS, BLOODS, CRIPS, GANGSTAS, NH’s, DEUCES", Diamond wrote. "Just some of these hoods in the same building is POWERFUL! Trying to use Their BLACK POWER TO BRING UNITY TO THE CITY! I pray that we can stay on this positive path".

Ahead of the rally, community organiser BigU1 took to social media to call on gangs to “come with the right heart” to the march, and added that they will unite for Nipsey, who was a key figure for the community, using his resources to invest in local businesses and end gang violence.

For #NIPSEYHUSSLE we Will UNITE……..

Nipsey, who was a member of the Rollin 60s Neighbourhood Crips Los Angeles Gang, was reportedly set to meet with the LAPD to discuss gang violence just hours after he was fatally shot.

The LAPD arrested the suspected shooter, Eric Holder, for homicide, after he was seen fleeing the crime scene in a white 2016 Chevy Cruze with a California license plate that was being driven by an unidentified female, according to the release published earlier by LAPD HQ.

Holder, who pleaded not guilty on Thursday and had his bail set at $5 million, is alleged to have engaged in a heated conversation with Hussle before leaving to grab a gun.

"Mr Holder walked up on multiple occasions and engaged in a conversation with Nipsey and the others that were there. He left and subsequently came back armed with a handgun, and purposefully and repeatedly fired, striking and killing Nipsey Hussle”, LAPD Chief Michel Moore told reporters Tuesday.

Who Killed Nipsey Hussle and the Commodification of Rap