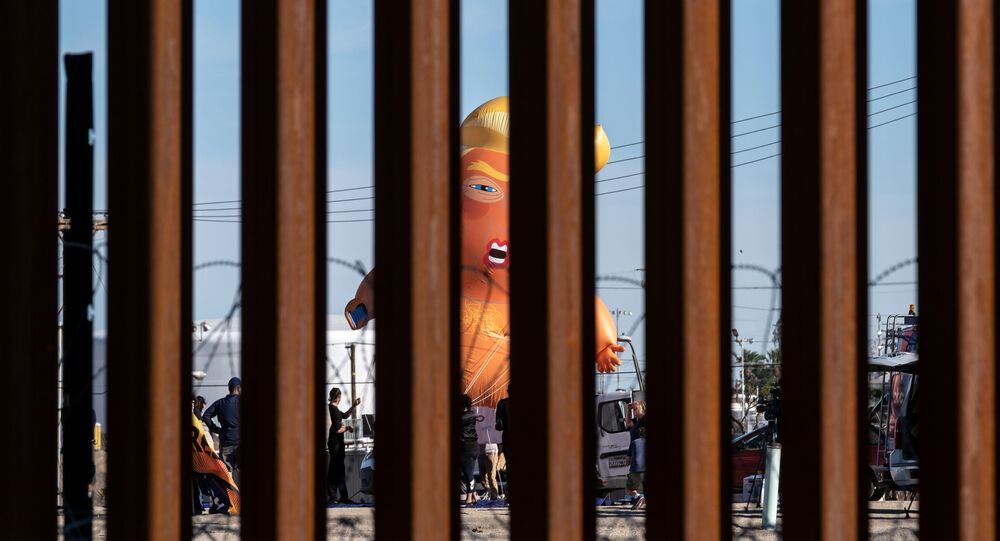 This is not the first time that critics of the US president have launched a giant inflatable Trump-shaped balloon to show their opposition to his policies.

A group of protesters set up a "baby Trump" blimp — a 20-foot-tall balloon made to caricature US President Donald Trump as a spoiled child with a phone in his hand — ahead of his tour of the country's southern border with Mexico near Calexico, California, where he inspected a section of the new border wall being constructed.

Once the footage emerged online, many social media users pointed out that the video did not reflect the real situation there: the group of protesters, they said, was small, while the crowd of supporters of Trump's policies was overwhelming:

How convenient your video leaves out footage of how small the protesting group is and how massive the support crowd is.

What are the idiots protesting? A president trying to protect his country's borders? #CloseTheBorderNow

Some suggested that the blimp had been launched to divert public attention from the "evil" that crosses the border every day — a remark which echoed President Trump's warning that criminals of all kinds are flooding into the US:

ANYTHING to distract attention from the evil that comes across the southern border every day.

As if it is going to deter the President or the patriots to oppose illegal takeover of America.

There’s a crisis of human trafficking and drugs pouring into our country at the southern border and this is what they think is border coverage? @abc

A number of netizens stressed that the inflatable blimp was disrespectful to the president of the United States:

Disgraceful and disgusting how they treat the President of the UNITED STATES OF AMERICA. The traitors should move to a country where they will be happy with their rules and laws. These Activists better wake up if they know what is good for the country.

The development came shortly after the US president threatened to slap tariffs on Mexican cars imported to the United States if Mexico does not stem the flow of illegal migrants crossing through its territory to enter the US. Otherwise, Trump warned, he would close the southern US border despite the harm it could cause to the economy.

© Wikipedia / Wikimedia Commons
Some 450 Miles of New US Border Wall Expected Completed By 2021
President Trump declared a national emergency in February to free up to $8 billion in federal funds to build a wall on the US southern border with Mexico in order to prevent criminals from pouring into the United States.

Congress passed a resolution to terminate Trump's border emergency declaration, but the president signed his first-ever veto to overturn the legislation.

Critics of Donald Trump's policies have repeatedly used the Trump-shaped blimps, depicting the US president as a screaming baby. Last summer, a UK activist group flew the inflatable when Trump arrived n London on his first state visit. Since then, it has been used in New York, Paris, Buenos Aires, and Dublin.