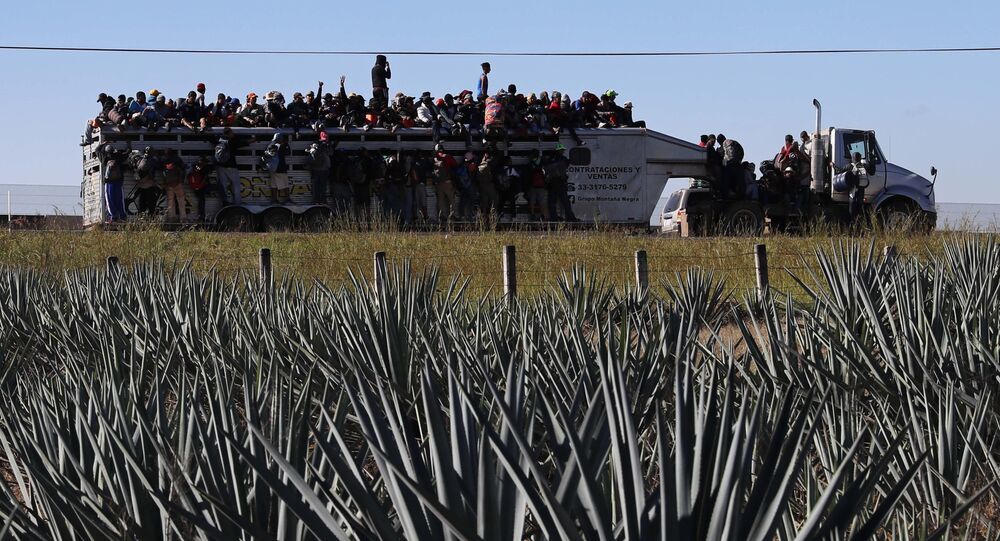 The announcement by US President Donald Trump did not come as a surprise because last week he bashed Mexico, accusing it of a lack of action in the handling the migration issue. The US president vowed that if Mexico would not stop migrant caravans from coming to America, he could close all trade with the country's southern neighbour.

US President Donald Trump took to Twitter to speak about relations with Washington's southern neighbour after the reports about new migrant caravans heading to America.

"Mexico, for the first time in decades, is meaningfully apprehending illegals at THEIR Southern Border, before the long march up to the U.S. This is great and the way it should be. The big flow will stop…," he tweeted.

Nevertheless, Trump has lashed out at Mexico, saying that if the country won't stop the caravans' progress, Washington would introduce 25% car tariffs.

"However, if for any reason Mexico stops apprehending and bringing the illegals back to where they came from, the U.S. will be forced to Tariff at 25% all cars made in Mexico and shipped over the Border to us. If that doesn't work, which it will, I will close the Border," he said.

He went on to speak about the drugs being smuggled via Mexico across the southern US border.

"This will supersede USMCA. Likewise, I am looking at an economic penalty for the 500 Billion Dollars in illegal DRUGS that are shipped and smuggled through Mexico and across our Southern Border. Over 100,00 Americans die each year, sooo many families destroyed!" he wrote.

In concluding, Trump announced that he was heading to the southern border "to show a section of the new wall being built".

Reacting to Trump's earlier threats to close the border with its southern neighbour, Mexican Foreign Minister Marcelo Ebrard stated that Mexico had decided not to respond to US statements related to the influx of migrants. At the same time, Mexican President Andres Manuel Lopez Obrador stressed that both countries would not benefit from the border closure.

The tense situation occurred after a report from Mexico's Ministry of Internal Affairs, showing that more than 76,000 migrants were detained after trying to get into the United States in February, while in March the figure was expected to increase to 100,000 people.

"This wall is unnecessary, and an abuse of power that will take away resources that could be used to help Americans across our nation," she tweeted.

On Thursday, Speaker Nancy Pelosi said the US House of Representatives would file a lawsuit as well to block Trump from transferring funds to pay for the construction of a wall.

On March 15, Trump issued the first veto of his presidency to strike down a congressional resolution to end his declaration of national emergency.

Trump declared a national emergency in February to free up to $8 billion in federal funds to build a wall on the US border with Mexico.