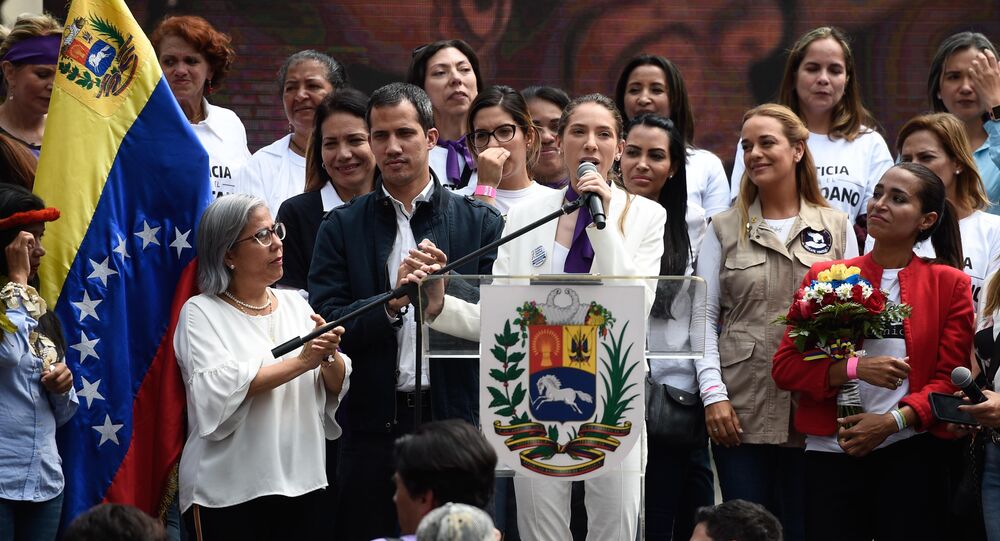 Fabiana Rosales, the 26-year-old wife of Juan Guaido, Venezuela’s self-proclaimed interim president, emerged in the political spotlight last week after she arrived in the United States to meet with President Donald Trump and other members of his administration.

Western media have already hailed her as an international ambassador for the Venezuelan opposition and a potent force: with a travel ban imposed on Guaido by the government of Nicolas Maduro, Rosales has taken highly publicised tours of neighbouring Peru and Chile, where she met with the presidents of both countries.

In a bid to shore up international support for the opposition, Rosales made it clear that she unconditionally supported Guaido’s efforts to oust Maduro and convince Venezuela’s Armed Forces to turn their backs on the legitimately elected president:

“Look, I am the wife of President Juan Guaido and I will accompany him on whatever route he takes and we will overcome whatever obstacles we face as we have done through all our years together. But I got involved in politics because I want to change my country”, she said during an interview in Lima, Peru’s capital.

Reacting to Rosales’ increasing political involvement, Venezuela’s Ambassador to Chile Arevalo Mendez told local media that she was “trying to boost Guaido’s image, as support for his movement in Venezuela deflates”.

Many social media users have been outraged by the fact that Western media and politicians have started calling Rosales the first lady of Venezuela, and slammed her as a “puppet”:

She looks exactly like the puppet she is. What sort of person asks a foreign power to help starve the poor of their own country? #HandsoffVenezuela

Only problem is she is not the First Lady of Venezuela or any other Country.

Maduro is President! Fabiana Rosales is Not The First Lady of Venezuala! Guaido is destined yo be arrested and jailed for his actions in Subverting the sitting President who is supported by the Military.

It's not your place, John, to decide who the first lady of Venezuela is. It's none of your business.

Yeah sure… whatever… and I am the Queen of England

Since her university years, Rosales has been a member of Popular Will, a political party founded by Guaido and another opposition figure, Leopoldo Lopez, in 2009. It was at a 2011 youth rally for the party that the two met, and eventually got married in 2013; the couple’s daughter Miranda Eugenia was born four years later.

In 2013, Rosales, who said that she always knew she wanted to follow in her mother’s footsteps and become a journalist, graduated from Universidad Rafael Bellosco Chacin. Her father, who was a farmer, also inspired her political activism, she said.

READ MORE: 'Are You a Monster Too?' Melania Trump Slammed Over Photo Op With Guaido's Wife

© AP Photo / Fernando Llano
'Against the Wall': Calls to Punish 'Traitor' Guaido Amid Immunity Revocation (VIDEO)
The move made it possible to arrest Guaido over breaching the constitution when he declared himself interim president. He also violated a 29 January government travel ban as he visited a number of regional countries in February and March.

Juan Guaido pledged to oppose Maduro while being sworn in as president of Venezuela’s disempowered National Assembly on 5 January. On 23 January, two days after the Venezuelan Supreme Court annulled his election, Guaido declared himself interim president in a move that was instantly recognised by the United States and prompted another 50 countries to follow suit.

In the meantime, Venezuela’s embattled President Nicolas Maduro has denounced Guaido’s proclamation as an attempted coup d’etat orchestrated by Washington. Despite the fact that dozens of countries have recognised Guaido, many other nations, including Russia, Cuba, and Turkey, have voiced their support for Maduro.