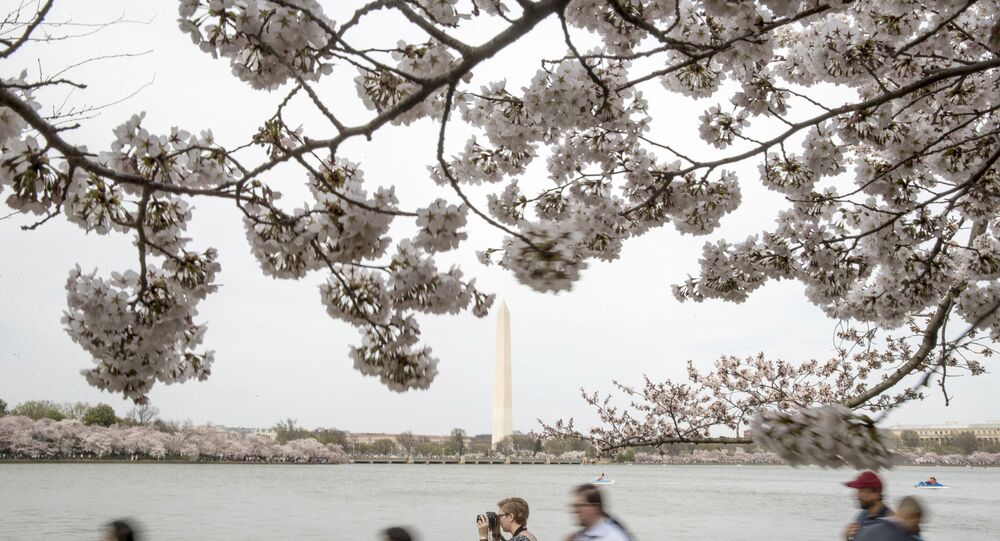 Spring has officially sprung in Washington, DC, as the US capital’s collection of Yoshino cherry blossom trees reached an early peak bloom on April 1.

After nearly a month of tracking cherry blossoms from green buds to peak bloom, the US National Park Service announced that 70% of the Yoshino blossoms are open as of Monday.

The Yoshino trees, first planted by First Lady Helen Herron Taft and Viscountess Chinda (wife of Japanese ambassador Count Chinda Sutemi) in 1912, have remained a staple of DC tourism for decades due to their uncommon presence in the states — and their fluffy pink and white glory.

ON THIS DAY in 1912, First Lady Helen Taft and Viscountess Chinda, wife of the Japanese ambassador, planted the first 2 of 3,000 cherry trees gifted by Tokyo Mayor Yukio Ozaki to Washington, D.C. 💕🌸 Both still stand at the terminus of 17th Street SW. 🇯🇵🇺🇸 #CherryBlossomDC pic.twitter.com/9iNPaKMHSI

Though the peak bloom date is "almost impossible" to predict "more than 10 days in advance," according to the NPS, this year's occurrence beat the April 4 average by three days.

Prior to the celebratory day, many Twitterians tracked the blossoming flowers in their budding stages.

Five down, one to go! The trees are at puffy white, the penultimate stage of the #BloomWatch! Peak still expected on Monday, when 70% of the Yoshinos will be in blossom, but some early risers are already there & more will join them as temps climb into the 70s today and tomorrow. pic.twitter.com/SZSGDZDJOR

Realizing that this start of the bloom period coincides with April Fool's Day, the NPS made it clear that this cherry blossom announcement is the real deal.

It's no April Fool — the cherry blossoms have reached peak bloom! Based on the current conditions and forecast, you can expect to see the trees in blossom for the next seven to 10 days. #CherryBlossomDC pic.twitter.com/3PtFhsE0f3

Monuments in the nation's capital such as the Jefferson Memorial, Martin Luther King Jr. Memorial, Washington Monument and Franklin Delano Roosevelt Memorial provided excellent backdrops for photos of the blossoms in full bloom around the Tidal Basin.

Felt good to get out and shoot this morning… #CherryBlossomDC pic.twitter.com/p41js02Jdo

In addition to the opportunity to view the flowers in peak bloom for the next four to seven days, the surrounding weeks have and will be packed with a number of "National Cherry Blossom Festival" events that honor both American and Japanese cultures.

Though events began March 20, celebrations, including the popular (and free) National Cherry Blossom Festival Parade, are expected to continue through April 15.

Almost ten years in #dc and this is the first time I’m seeing the #CherryBlossomDC #KiteFestival! pic.twitter.com/oei3eOo5dX

He's some video of the Japanese style drumming at the #cherryblossomfestival pic.twitter.com/CN3LCojW4y

Those unable to get to the DC area in the coming days are in luck, because according to Washington.org, the Kwanzan trees, a similar cherry species given to the US shortly after the iconic Yorshinos, should bloom in mid to late April "two weeks after the Yoshino trees."

‘Get Your Own!’: Sassy St. Bernard Claims Owner’s Anniversary Flowers