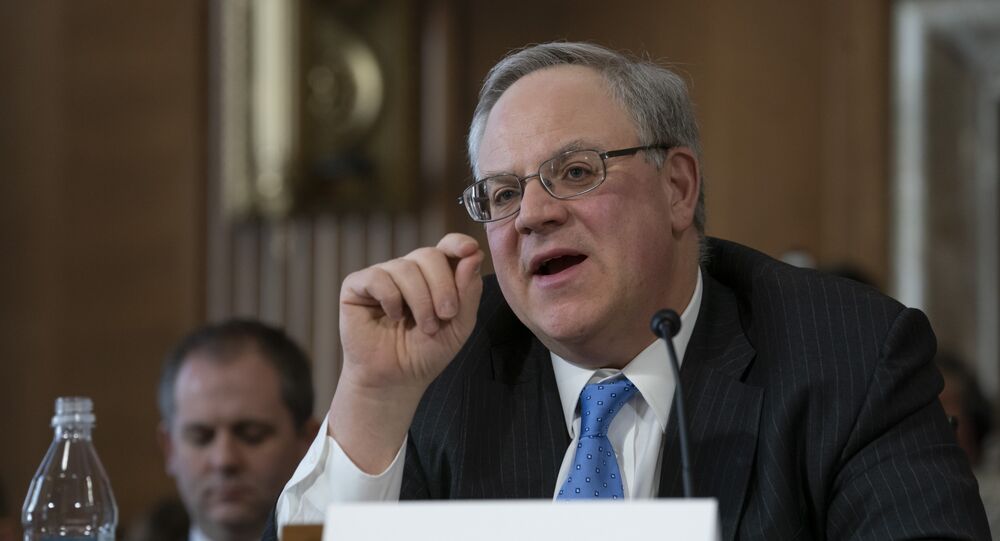 Although many of those who have seen the hilarious pictures split their sides with laughter, some focused on the political message behind the stunt, applauding Greenpeace’s efforts.

On Thursday, POTUS’ appointee for the position as head of the Department of the Interior, David Bernhardt, appeared before a confirmation hearing, but it was not only him that drew public attention at the event, but a guest with unexpectedly outlandish looks.

While Bernhardt was testifying in front of the Senate Energy and Natural Resources Committee, an activist from the environmental group Greenpeace could be seen sitting behind the nominee, wearing a terrifying monster-like mask, that of a creature from the classic 1954 horror film “The Black Lagoon”.

The protest was targeted against Republican David Bernhardt, an oil industry lobbyist, who has assumed office as acting US secretary of interior, now being in charge of all federal land and natural resources in the country.

Twitterians eagerly picked up on the awkward moment, with the swamp monster head captured on camera as it lurked in the background. Users reposted respective pictures, and still can’t get enough of it.

“Is the soiled Oilman causing spontaneous Swamp Monster mutations to those around him?” one netizen posed a question, while another referred to the monster sitting behind Bernhardt as “an oil waste one”.

Many, naturally, couldn’t suppress their laughter:

The moment when Capitol Police notice the swamp monster sitting behind oil lobbyist David Bernhardt is too much 😂 pic.twitter.com/0WNuuRKhWW

SPOTTED in the US Senate: a swamp monster!

Also a person wearing a green mask, who appears to be concerned that the swamp monster could be confirmed as the next Secretary of the Interior.

But seriously, the US Senate should reject oil lobbyist David Bernhardt's confirmation. pic.twitter.com/4GgvWua0Ly

Greenpeace USA also addressed the issue in a tweet:

“How many swamp monsters do you spot?” the fund wrote, bringing up Trump’s words that “he’d drain the swamp”.

How many swamp monsters do you spot?

The NGO later issued a statement taking credit for the stunt, putting across its message in an explicit way:

“David Bernhardt heading the Interior Department would be a dream come true for fossil fuel companies, but a nightmare for the American people”, going on to say:

“If ethical violations alone don’t disqualify him from holding this position, his record of selling out public lands and waters to his industry buddies should”, the environmental organisation rounded off.