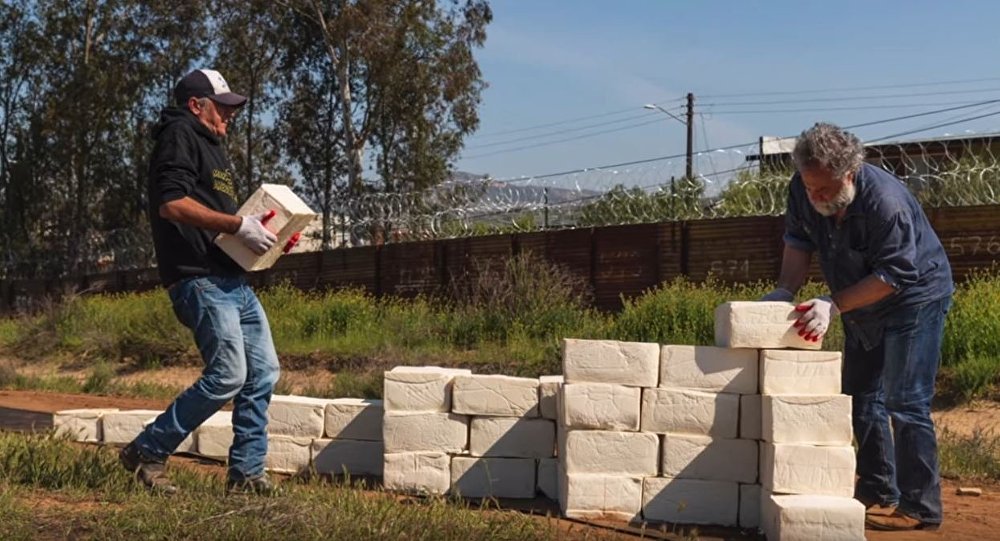 The artist says his project is as absurd as Trump’s wall is. US Customs and Border Protection (CBP) appears to disagree.

Cosimo Cavallaro, a Los-Angeles based artist, decided to build a wall made of cotija cheese as a protest against US President Donald Trump's wall along the US-Mexico border.

Explaining his idea, Cavallaro said that his cheese wall is supposed to show how absurd and useless Trump's border wall is.

"To spend all this money to keep dividing the countries, I think is a waste," Cavallaro told the LA Times. "You see the waste in my wall, but you can't see the waste in [Trump's] $10-billion wall?"

​Cavallaro is building the cheese wall in southeastern San Diego County, mere meters from the actual metal border barrier. However,  he currently only has enough funds for 200 blocks of cheese, which will only make for 25 feet (fewer than eight meters) of wall. The artist is asking for donations to build an entire 1000-foot cheese wall.

According to the project's website, the blocks being used to build the wall are made out of hard cheese and cost $100 each.

© REUTERS / Khaled Abdullah
'Breaking Point': UN Starts Emergency Operation in Yemen to Feed Up to 9Mln
The artist says he works with perishable materials such as food to underscore "fleeting and decadent nature" of humankind. One can only imagine the smell that will result when the "wall" starts to spoil in the heat of the US southern border.

In the meantime, while Cavallaro insists the border wall is a "waste," CBP has turned to US Congress with a plea to provide solutions to massive migrant influx that is driving CBP to its "breaking point," since the agency is running out of space at its detention facilities as it detains illegal migrants by the hundreds.

As Sputnik reported earlier, migrants can cross the US border illegally simply by stepping through vehicle barriers, which are no obstacle for pedestrians. Over the last weekend, CBP detained 400 people in Arizona alone.

​"The smugglers are so brazen now that they are chartering buses to pick up migrants in southern Mexico and bring them directly to the border area to file across and await discovery by the US Border Patrol, knowing that the migrants will be released in just a few hours to go wherever they want to go in the United States," Jessica Vaughan, director of policy studies at the Center for Immigration Studies, said about the migrant situation.

Trump has declared a national emergency over the migrant situation, looking to divert military funding to the construction of a continuous physical barrier along the entire span of the US-Mexico border. Despite fierce opposition from the Democrats, the lawmakers failed to override the national emergency order. Currently, Trump seeks to obtain $8 billion for construction of the wall by redirecting funds from Department of Defense and Treasury Department programs, according to Bloomberg. Earlier, Trump sought $5.7 billion for the wall project.

What a waste of cheese.

He could give the cheese to some starving people instead. That'd be a more powerful, useful statement.

Swiss with lots of holes in it?