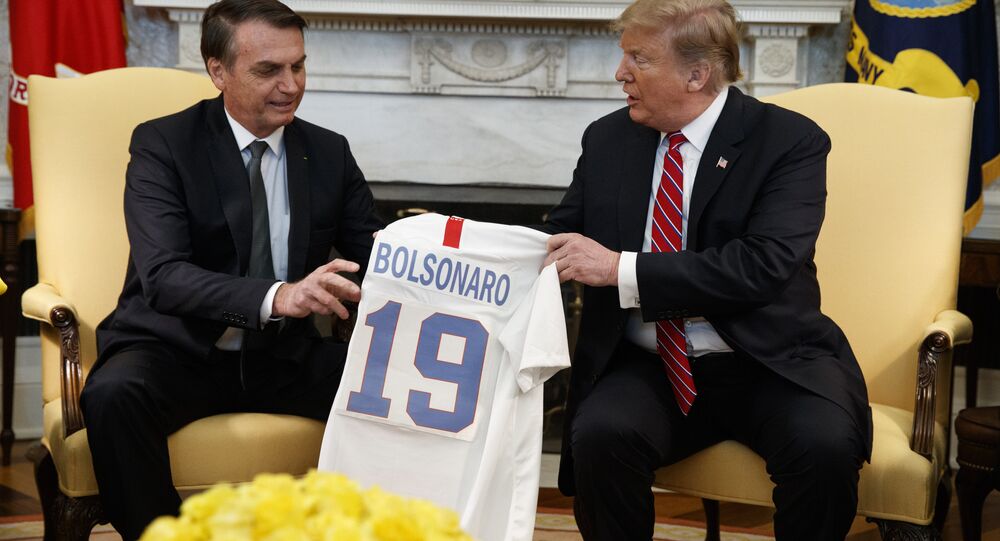 US President Donald Trump has been giggled at on social media after he gave Brazilian President Jair Bolsonaro what was claimed to be “a homemade” football jersey with the latter’s name glued to it in a do-it-yourself style during the pair’s meeting in the White House’s Oval Office.

Having first exchanged compliments on Twitter, the two leaders made up their minds to seal their friendship by presenting shirts to each other. Bolsonaro took the lead and handed his gift to Trump – an iconic yellow Brazilian jersey, featuring the name “Trump” and the number “10” on it,  which is the number used by the nation’s football legend Pele, as well as at some point by Ronaldinho.

However, the gift that Trump extended to his Brazilian counterpart appeared in the eyes of some to be incredibly tacky, fixed in a slipshod manner with the word “Bolsonaro” emblazoned on what seemed to be a standard, no-name T-shirt – a fact that was instantly picked up on by attentive netizens, despite many pointing out that football is not a top popular sport in the US. Some even took note of Bolsonaro glancing several times at the newly-received shirt in puzzlement, as well as showing an apparent urge to examine it with his fingers.

Social media users ridiculed Trump’s gift, calling it “a paper cut out” and suggesting the White House could have come up with a more adequate gift than a “regular jersey” with a “piece of paper slapped on it”.

LOL the @WhiteHouse is such a dumpster fire of unqualified/unprepared assholes that they couldn't even get a real jersey printed for Bolsonaro….is that IRON ON some staffer had to print last minute!?!? 🤣🤣😭😭 pic.twitter.com/tots6fxlBu

Interesting how he didn't give him a gift of an orange jumpsuit as a reminder that the US are "Guardians of Peace" pic.twitter.com/eYj80623LN

“A conversation between two Trump’s aides: ‘He gave a Brazilian jersey for our president but we didn’t buy anything for him… What now?’ ‘I got it! Bring me a white shirt, a printer, paper and glue…’” one person acted out a hypothetical conversation between the two leaders. Meanwhile, another, attempted tongue-in-cheek to picture Bolsonaro responding to Trump’s gift-giving gesture:

Twitterians knocked the jersey as tackily “homemade” and “hamberder”, thereby making reference to an incident when POTUS misspelled “hamburger” in a tweet. Many opted to mock the US and Brazilian leaders’ “bromance”:

"Trump gets Bolsonaro in the USA"

Meanwhile, one netizen detected some logic in the number emblazoned on the jersey Bolsonaro gave to Trump, swapping around the letters:

And here it gets interesting… 👇 pic.twitter.com/nFnbRn677X

During the talks, Trump announced he would designate Brazil a major non-NATO ally, opening the door for Brazil to receive more US military aid, with the two leaders further discussing what they called the “fake news” and touched upon the Venezuelan crisis and an increase in their efforts to remove the country’s President Nicolas Maduro from office.