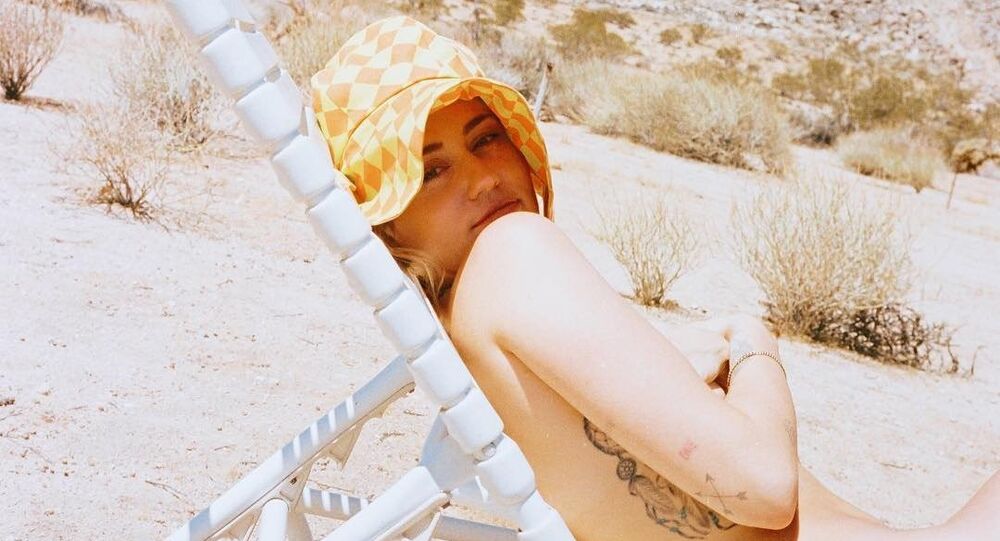 The bombshell apparently referred to her tight festival schedule for this summer, as she is due to be one of the headliners at, among other events, the Woodstock Music and Arts Fair’s 50th anniversary celebration in Watkins Glen, New York - the most iconic music festival in American history.

US singer and actress Miley Cyrus has stripped down for a naked Instagram snap, telling her fans she is “queer and ready to party” in the run-up to a new beach and festival season.

The famed blonde posted a snapshot of her sun-kissed self in the buff snuggling into a lounger in the middle of a desert, while her arm is modestly placed over her chest to hide her private parts.

“Festival season is here, I'm queer, and ready to party! lets go summer 2019!" the caption reads, with fans immediately taking to the comment section to express their delight over the saucy scene captured in the picture. The pop star’s 88-something million-strong army of Instagram followers could also take a glance at Cyrus’ dreamcatcher inkwork on her ribcage and a few small tattoos above her elbow.

In the meantime, Miley is among the participants at the Woodstock 50 Music and Arts Fair — the 50th-anniversary celebration of the iconic music festival, slated for 16 —18 August. Below another picture Miley wrote, tongue-in-cheek, referring to the landmark event due to be also attended by other stars such as JAY-Z, The Killers and Dead & Company and so on:

"Woodstock here I come! When I'm not riding a wrecking ball, you can find me on a giant cock", Miley cheekily noted.

Find you someone who can do both 🖤

Miley, who is also going to perform at Glastonbury Festival in Britain in the upcoming summer, has underscored her “queer nature” on multiple occasions. She told Vanity Fair in an interview earlier this year that her identity is still vitally important now that she is married to actor Liam Hemsworth.

@rupaulsdragrace premier! So proud of every Queen! Each of you have a story to tell and we’re so here to listen, accept, and love you! Have a great season ladies! 📸 @vijatm

"We're redefining, to be f**king frank, what it looks like for someone that's a queer person like myself to be in a hetero relationship. A big part of my pride and my identity is being a queer person", Cyrus noted at the time.