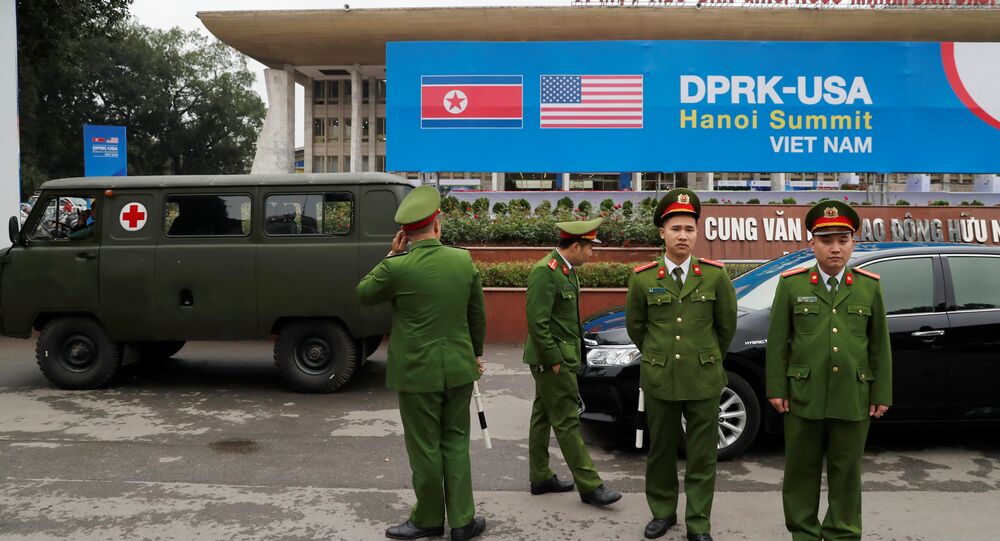 NEW YORK (Sputnik) – US Special Representative for North Korea Stephen Biegun will visit New York City on Thursday to update the UN Security Council on the recent summit between US President Donald Trump and North Korean leader Kim Jong Un, the Department of State said in a press release.

The Security Council is set to discuss on Thursday a report on North Korea’s compliance with sanctions.

READ MORE: The 'War Party' and the Path Forward with North Korea

The long-anticipated second summit of Trump and Kim concluded in the Vietnamese capital of Hanoi in late February with no agreement signed. Trump walked away from the talks on the summit's second day after Kim demanded that all sanctions be lifted in exchange for denuclearization, but not in the areas Washington wanted.

© REUTERS / KCNA
North Korea Suffers ‘Artificial’ Earthquake Tremor Due to ‘Explosion’ – Reports
However, the situation on the Korean Peninsula has been reportedly improving since early 2018, much due to the intensification of Pyongyang-Seoul-Washington talks. Since the beginning of last year, three inter-Korean summits and two meetings of North Korean leader and the US president have already been held.

Last week, the US-based media reported, citing a senior US Department of State official, that Pyongyang could be denuclearized during this term of US President Donald Trump ending in 2021.

However, Russian senior lawmaker Oleg Morozov has suggested that full denuclearization of North Korea by 2021 is hardly possible, as international guarantees are needed to complete this process.

© REUTERS / Denis Balibouse/File photo
UN Chief Hopes Denuclearization Talks With North Korea Continue - Spokesman
Moscow has been also advocating easing sanctions against Pyongyang. The package of restrictions introduced in late 2017 became the toughest among all international sanctions against Pyongyang. It implies not only tough restrictions on trade with North Korea but also prevents third countries from using North Korean labor.

Meanwhile, several US think tanks and South Korea's Yonhap news agency have reported, referring to recent satellite images, that the construction works were allegedly underway to restore the Sohae Satellite Launching Station at Tongchang-ri, which North Korea pledged to dismantle after the summit in Singapore last year.