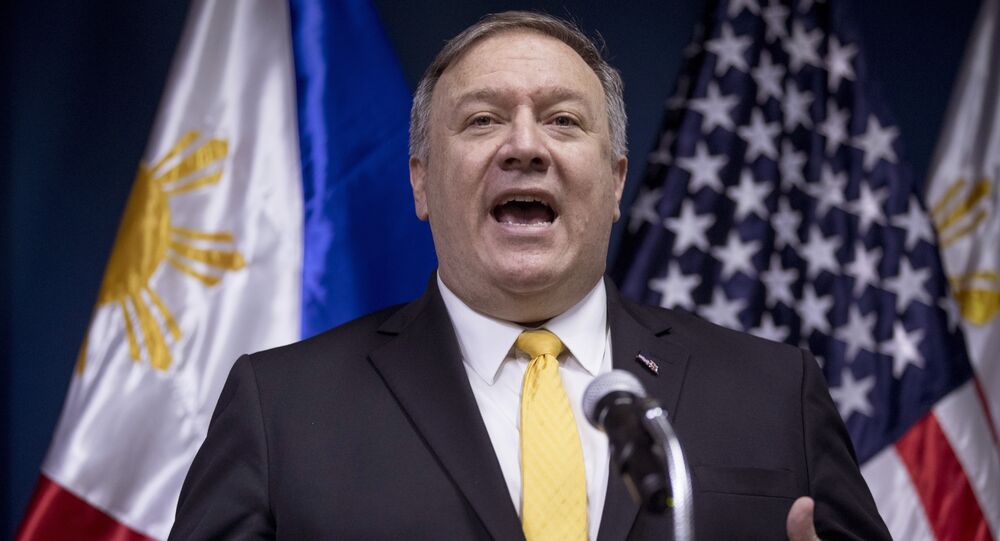 US Secretary of State Mike Pompeo said Tuesday on the sidelines of the CERA Energy Week conference in Houston that Washington is "committed to bringing Iranian crude oil exports to zero as quickly as market conditions will permit".

"We have every intent of driving Iranian oil exports to zero just as quickly as we can", Pompeo said on Tuesday evening.

Moreover, Pompeo urged the whole oil industry to work with Washington in order to promote US foreign policy, especially in Asia and in Europe, and to punish what he dubbed "bad actors" on the world stage.

"We need to roll up our sleeves and compete – by facilitating investment, encouraging partners to buy from us and by punishing bad actors", Pompeo said.

READ MORE: Iran Has Other Ways to Stop Oil Flow Besides Closing Strait of Hormuz — Official

The US Secretary of State also said that the US oil and gas export boom had allowed Washington to meet energy demands once satisfied by its geopolitical rivals.

© REUTERS / Nick Oxford/File Photo
Crude Games: Why US Attempt to Flood Oil Market to Hurt Iran Will Backfire
The United States brought back sanctions on Iran last year after President Donald Trump pulled the country from the 2015 nuclear deal that his predecessor co-signed together with Russia, China, Germany, France, and the United Kingdom.

The first round of sanctions came into force in August, followed by a second round in November. The sanctions targeted not only Iran's economy but also individuals and entities that continued doing business with Iran. The US restrictions also included measures that curb Iran's oil industry.

According to the IRNA news agency, Tehran’s revenue from oil exports in the first nine months of the current Iranian year — which runs from 21 March 2018 to 20 March 2019 — have increased by 48.9 percent year-on-year, despite the reimposition of US sanctions. The main reason for the increase in revenue was reportedly the oil price hike in global markets.

Iran's oil revenues from that period amounted to over $17 billion. However, the price of oil has recently dropped from $80 per barrel to $50 against the background of the trade war between the United States and China, as well as oversupply on the oil market.

© Wikipedia / Pascal
Strait of Hormuz May Close if Iranian Oil Exports Stopped, IRGC Navy Chief Warns
Meanwhile, the Trump administration has announced a sale for all the remaining oil and natural gas containing areas in US government-controlled waters in the Gulf of Mexico.

Since taking office, Trump has also rolled back regulations that hindered the construction of domestic oil pipeline projects such as the Dakota Access and Keystone XL pipelines.