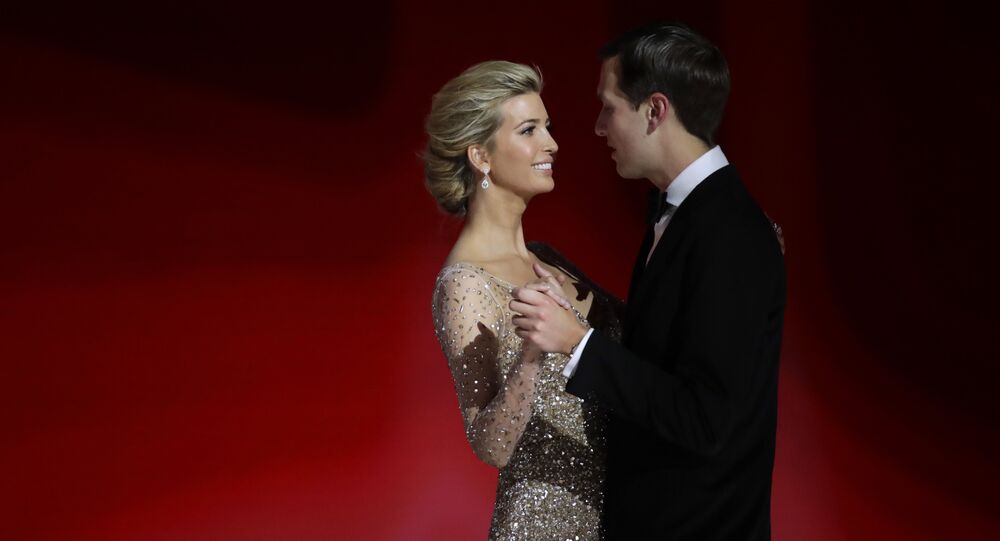 Donald Trump's bromance with New England Patriots superstar Tom Brady has become a true legend: the two are known to have golfed together before the real estate tycoon became president. The quarterback also apparently supported Trump in the 2016 election, as a signature red "Make America Great Again" hat was photographed in his locker.

US President Donald Trump has reportedly joked that his senior adviser and son-in-law Jared Kushner is "half the size of Tom Brady's forearm", The New York Times reported, citing a much-anticipated White House tell-all book by journalist Vicky Ward.

READ MORE: CNN Likens Trump to Illiterate in Story on Why Ivanka Has Security Clearance

Trump is also golf partners with the legendary Patriots quarterback, Brady, who once described POTUS as "a good friend".

On top of this, Trump's first wife and Ivanka's mother, Ivana, once revealed that Donald even tried to play cupid and fix up a date for their daughter and the football star.

"At one point, Donald wanted her to date Tom Brady, the quarterback. He said, 'You have to meet him!' But Ivanka wasn't into it", Ivana wrote in her book, "Raising Trump".

As Donald Trump's matchmaking ambitions suffered a fiasco, he wound up having Jared Kushner as a son-in-law.

According to Ward's book, "Kushner Inc: Greed. Ambition. Corruption. The Extraordinary Story of Jared Kushner and Ivanka Trump", the former real-estate mogul approved of Ivanka's choice but wondered why she had decided to convert to Judaism for their marriage.

© REUTERS / Kobi Gideon/Courtesy of Government Press Office
US House Democrats Seek Criminal Probe of Jared Kushner Over Security Clearance
Still, the businessman-turned-president is thought to be quite frustrated with the fact that it was not Brady who had tied the knot with Ivanka, and this is not the first time that Trump is reported to have joked about the matter.

In the heat of the 2016 presidential race, Trump reportedly took a moment to call Tom Brady to wish him a happy birthday, and couldn't resist the temptation to throw a jibe and say that he'd lost out on the ultimate prize: Ivanka.

"Ivanka chose Jared. That's the only thing you weren't able to win", the would-be president playfully said at the time, according to a recollection by Jason Miller, a former top campaign aide.

In 2018, The New York Times cited five sources as claiming that they heard Trump joke several times he "could have had Tom Brady" as a son-in-law: "Instead, I got Jared Kushner".

READ MORE: Ivanka Urges Germans to Remember They Have More in Common With US Than Russia

Brady once spilled that he had met Trump back in 2002 and that they had subsequently become great golfing buddies:

"I've known him since 2002 when I judged one of his beauty pageants… so I've known him for a long time. He always gives me a call and different types of motivational speeches at different times", Tom said, adding that Trump is "a good friend and we've had a lot of time on the golf course together".

Even though the quarterback didn't reveal if he'd voted for Trump in 2016, he praised him for his accomlishments in 2015:

"It’s pretty amazing what he’s been able to accomplish as an entrepreneur, as a television star and now run for political office. People who can do those types of things and transition into different arenas and still have that type of appeal and carry-over. He’s obviously appealing to a lot of people. He’s a hell of a lot of fun to play golf with".

The feelings are definitely mutual, since Trump, who's fond of tweeting, sends out posts about Brady every once in a while:

Tom Brady is a good friend of mine, a great player, a great guy and a total winner! Fantastic comeback win-this is what our country needs!

Tom Brady would have won if he was throwing a soccer ball. He is my friend and a total winner! @Patriots

Ivanka and Jared, both senior White House advisers, have been married since 2009, the same year Brady tied the knot with Brazilian supermodel Gisele Bundchen.