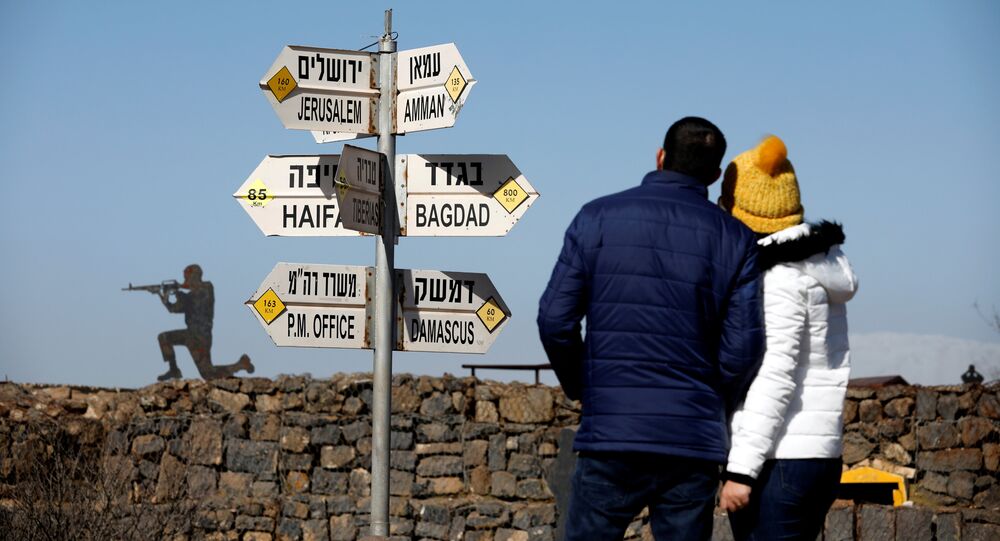 WASHINGTON (Sputnik) - New legislation proposed in both houses of US Congress on Wednesday called for recognizing Israel’s sovereignty over the Golan Heights as part of the strategy to counter Iran and Syria.

"It shall be the policy of the United States… to recognize Israel’s sovereignty over the Golan Heights," a copy of the Senate version of the bill stated.

The move, according to the resolution, is critical in light of new realities on the ground including Iran’s presence in Syria. Israel’s security from attacks from Syria and Lebanon cannot be assured without control over this territory, the resolution said.

The resolution claims that Iran has used the war in Syria to establish a long-term military presence in the Levant to attack Israel from across the Golan Heights "and to create territorial corridors that allow it to provide arms to its troops and terrorist proxies."

In addition, the bill said it is in US interest that Israel retains control over this territory to ensure that the Syrian government faces "diplomatic and geopolitical consequences" for killing civilians and allegedly using chemical weapons.

US Senators Marco Rubio, Ted Cruz and Tom Cotton along with Congressman Mike Gallagher introduced companion bills in the House and Senate, which was co-sponsored by 15 other Republican lawmakers, according to a release from Rubio’s office.

Previously, Ted Cruz has already called on Washington to recognise Israeli's claims to sovereignty over the occupied Golan Heights, together with Senator from Arkansas, Tom Cotton.

The disputed territory of the Golan Heights was seized by Israel from Syria during the Six-Day War in 1967. In 2018, the UN General Assembly adopted a resolution urging Israel to immediately withdraw its forces from the Golan Heights after Tel Aviv organized local elections in the area on October 30.

The both sides still remain at war as a result of the conflict and the lack of formal diplomatic relations.